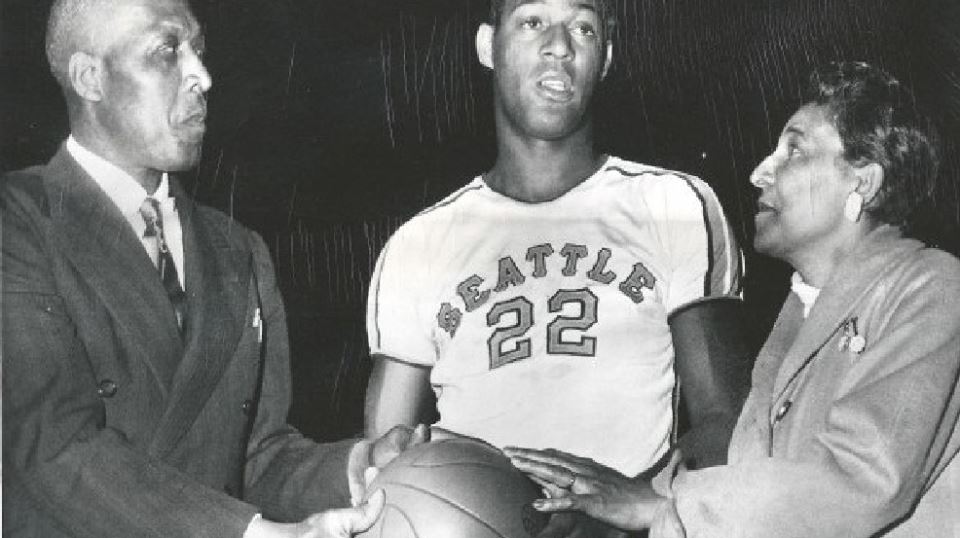 GM – FBF – Today, I would like to share with you a story about one of the most gifted Professional Basketball players during his day. Setting records that only a handful of players have duplicated or surpassed today, he will always be called one of the 50 best who have ever played the game. It was a joy of watching him play during his later years. Enjoy!

Remember – “If you look up the definition of greatness in the dictionary, it will say Michael Jordan” – Elgin Baylor

Elgin Gay Baylor was a professional basketball player, who played for Los Angeles Lakers. He was born on September 16, 1934 and began playing basketball from an early age. Two of his older brothers were also basketball players, and Baylor took naturally to the game. He was already known to be a gifted player by the time he was in high school, and was selected to be a three time All City player. However, his academic record had always been poor, and he dropped out of high school to work odd jobs and play in local leagues.

He rejoined high school a few years later, by which time he had grown to his full height of 6 feet 5 inches and weighed 190 lbs. During this time he won a trophy for being the Area’s Best Basketball player for 1954. He broke several records that season and maintained his outstanding performance.

Because of his lackluster academic record, he did not get admitted to college but a friend helped him to get a scholarship to attend the College of Idaho. There he played both basketball and football, after which he set out to attend Seattle University. He led them to NCAA Championship finals, which the team lost to the Kentucky Wildcats. In 1958, he was drafted by the National Basketball Association, where he joined the Minneapolis Lakers (later renamed the Los Angeles Lakers). He left his final year of college at Seattle University and chose to play full time for the Lakers.

The team had been performing poorly when Baylor joined and he was given a $20,000 contract to help bring them back on their feet. His contribution to the team’s improved performance has been acknowledged by all, including the owner of the LA Lakers Bob Short himself, who says that if Elgin Baylor hadn’t joined the team, it probably would have continued to perform miserably and might even have gone out of business entirely.

In his first season with the NBA, Baylor was named “The Rookie of the Year” with some of the best statistics in the game. He finished fourth in the league in scoring, third in rebounding and eighth in assists. He led the Lakers all the way from last place previous year to the NBA Finals, which they lost to the Boston Celtics. Baylor continued to perform at the top of his form, pushing the boundaries and setting new records each year. During the 1960-61 season, he scored 71 points in a single game against the New York Knicks, which was the record for most points scored by a single player in a game at the time, breaking his own record of 64 points set the previous year. He led the Lakers to a total of 8 NBA finals during his career.

During his later years, he began to be plagued by knee problems, which caused him to retire early. This came at a great personal cost to him, as the very same year his team set an NBA record of 33 consecutive wins, and also won the NBA Championships that season. As a sign of his tremendous contribution, he was honored with a championship ring by his team, even though he had not been an active member of the team at the time. Elgin Baylor officially retired from the NBA during the 1971-72 season. Some of his records still stand to date, such as most number of points scored in an NBA Final (61 points in game 5 of the 1962 NBA Finals).

He was selected to the All-NBA First Team 10 times, and to the NBA All-Star team 11 times. He was inducted into the Naismith Memorial Basketball Hall of Fame in 197. He has also been ranked among the Top 50 NBA Players of All Time by several magazines. Research more about this great player and share with your babies. Make it a champion day!