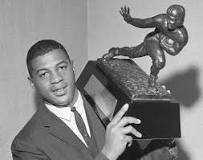 GM – FBF – I know that many of you may have seen the movie The Express: The Ernie Davis Story, if you haven’t please see it. Today’s story is about that man, who came from humble beginnings in Elmira, NY. He was an American football player, a halfback who won the Heisman Trophy in 1961 and was its first African-American recipient.

He played college football for Syracuse University and was the first pick in the 1962 NFL Draft. Selected by the Washington Redskins of the National Football League (NFL) in December 1961, he was then almost immediately traded to the Cleveland Browns and issued number 45.

He was diagnosed with leukemia in the summer of 1962, and died less than a year later at age 23, without ever playing in a professional game. He was inducted into the College Football Hall of Fame in 1979. Enjoy!

Remember – “Someplace along the line you have to come to an understanding with yourself, and I had reached mine a long time before, when I was still in the hospital. Either you fight or you give up.” – Ernie Davis

ERNIE DAVIS A MAN OF COURAGE – When all his now-fabulous records are broken, as they surely will be someday, when the story of his personal tragedy is no more than an occasional recollection in the mind of an aging generation, Ernie Davis will still be remembered as the first African American to win the Heisman Trophy. This award is given annually by New York’s Downtown Athletic Club to the best college football player. Of all such tributes it has come to be regarded as the most important. Sportswriters and broadcasters across the country select the winner, and the award implies something more than just ability on the playing field. It suggests character, too, a quality that Ernie Davis owned in abundance.

Ernie Davis was only 23 when he died in the Lakeside Hospital in Cleveland. During his short lifetime he had not had time to accomplish anything outside of sport; in fact, he had not even had time to fulfill his prime ambition in sport. From the time of his early athletic successes in high school, Ernie had set his heart and mind on being the best professional football player anywhere. He was a shy and quiet young man, and through football he could articulate his pride and the longing for respect and success that burned inside him like a roaring furnace.

Although every college that covets championship football would like to have had Ernie for a student, he chose Syracuse. “I wanted to play in the big time,” he explained, “and a lot of people including Jim Brown persuaded me that I’d have better opportunities there.” When Ernie took over Brown’s old position as the Syracuse halfback, he proudly wore Brown’s No. 44 jersey and during the next three years proceeded to break most of Brown’s records for ground gaining and point scoring.

Ernie followed Jim Brown to the Cleveland Browns as a pro, and, after the financial arrangements had been made, everyone thought that the pairing of these two strong, swift and elusive runners would return the Browns to their former eminence in the National Football League. There was to be a delay, however. Just as that season was about to begin, Ernie Davis was hospitalized with “a blood disorder.” It turned out to be acute monocytic leukemia, the most virulent form of blood cancer.

Davis was treated with a drug known as 6-MP, and within weeks his illness was in a state of total remission. No one knew if it would recur.

Wherever he went in Cleveland that fall, Ernie Davis was as much of a celebrity as if he had been scoring touchdowns for the team. “Hi ya, Ern,” “Hi, Ernie,” “How ya feeling, Ernie?” the fans would shout at him as he hurried, head down, through the stadium on the way to the team’s dressing room. A flicker of a smile would cross Ernie’s usually solemn face as he acknowledged a greeting or reluctantly paused to sign an autograph. He often sat on the bench with the team, one of them in all but uniform. “This is when it’s really frustrating,” he said one afternoon during the Browns’ game with the St. Louis Cardinals. “I’m in real good shape now. But it’s too late in the season to take the time during practice to work me into the setup.”

After the game Ernie went back to the dressing room to congratulate his victorious teammates, and many of the happy players slapped him on the back as if he had been a part of the triumph. Art Modell, the youthful president of the Browns, came up to Davis and said, “Ernie, why don’t you take the Thanksgiving weekend off? You could go spend some time with Helen.” Modeil winked at this reference to Ernie’s girl, Helen Gott, a Syracuse University senior from East Orange, New Jersey.

Later Davis talked about the future in his diffident way, as if every hesitant word were being pulled from within him by the greatest effort. “Starting next year,” he said, “I expect to play 10 or 11 years and then go into business. I’d like to get into purchasing or marketing, something like that where I could use what I learned in college.” Jimmy Brown got Ernie started before the winter was over, helping him land a job with Pepsi-Cola. In his spare time, Ernie played basketball to stay in shape.

Later that week Ernie Davis paid a call on Art Modell at the Browns’ office and said that he had to go into the hospital briefly for some additional treatment. They talked about the future of the football team and how Ernie believed this would be the year the Browns would regain the championship. Ernie apologized, as he often had, for the expense that his medical care was causing the Browns. He entered the hospital on Thursday May 16th and went into a coma on Friday, May 17th.

Early the next morning, Saturday, May 18th he died in his sleep and the news of his death shocked everyone who admires courage and sportsmanship and the many other good, human qualities that Ernie Davis brought to his surroundings. Research more about this great American hero and share with your babies. I will be in executive meetings all day and will not be able to respond to any posts. Make it a champion day!