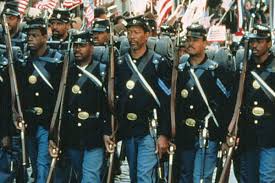 GM – FBF – The negro served honorably during the Civil War in Arkansas, Illinois, Rode Island and many other areas of the country but The Massachusetts 54th gained early glory.

Today in our History – January 26, 1863 – General recruitment of African Americans for service in the Union Army was authorized by the Emancipation Proclamation issued by President Lincoln on January 1, 1863. Secretary of War Edwin M. Stanton accordingly instructed the Governor of Massachusetts, John A. Andrew, to begin raising regiments including “persons of African descent” on January 26, 1863. Andrew selected Robert Gould Shaw to be the regiment’s colonel and Norwood Penrose “Pen” Hallowell to be its lieutenant colonel. Like many officers of regiments of African-American troops, both Robert Gould Shaw and Hallowell were promoted several grades, both being captains at the time. The rest of the officers were evaluated by Shaw and Hallowell: these officers included Luis Emilio, and Garth Wilkinson “Wilkie” James, brother of Henry James and William James. Many of these officers were of abolitionist families and several were chosen by Governor Andrew himself. Lt. Col. Norwood Hallowell was joined by his younger brother Edward Needles Hallowell who commanded the 54th as a full colonel for the rest of the war after Shaw’s death. Twenty-four of the 29 officers were veterans, but only six had been previously commissioned.

The soldiers were recruited by white abolitionists (including Shaw’s parents). These recruiters included Lieutenant J. Appleton, also the first man commissioned in the regiment, whose recruiting efforts included posting a notice in the Boston Journal. Wendell Phillips and Edward L. Pierce spoke at a Joy Street Church recruiting rally, encouraging free blacks to enlist.[citation needed] About 100 people were actively involved in recruitment, including those from Joy Street Church and a group of individuals appointed by Governor Andrew to enlist black men for the 54th.

The 54th trained at Camp Meigs in Readville near Boston. While there they received considerable moral support from abolitionists in Massachusetts, including Ralph Waldo Emerson. Material support included warm clothing items, battle flags and $500 contributed for the equipping and training of a regimental band. As it became evident that many more recruits were coming forward than were needed, the medical exam for the 54th was described as “rigid and thorough” by the Massachusetts Surgeon-General. This resulted in what he described as “a more robust, strong and healthy set of men were never mustered into the service of the United States.” Despite this, as was common in the Civil War, a few men died of disease prior to the 54th’s departure from Camp Meigs.

By most accounts the 54th left Boston with very high morale. This was despite the fact that Jefferson Davis’ proclamation of December 23, 1862, effectively put both African-American enlisted men and white officers under a death sentence if captured. The proclamation was affirmed by the Confederate Congress in January 1863 and turned both enlisted soldiers and their white officers over to the states from which the enlisted soldiers had been slaves. As most Southern states had enacted draconian measures for “servile insurrection” after Nat Turner’s Rebellion, the likely sentence was a capital one.[citation needed]

After muster into federal service on May 13, 1863, the 54th left Boston with fanfare on May 28, and arrived to more celebrations in Beaufort, South Carolina. They were greeted by local blacks and by Northern abolitionists, some of whom had deployed from Boston a year earlier as missionaries to the Port Royal Experiment. In Beaufort, they joined with the 2nd South Carolina Volunteers, a unit of South Carolina freedmen led by James Montgomery. After the 2nd Volunteers’ successful Raid at Combahee Ferry, Montgomery led both units in a raid on the town of Darien, Georgia. The population had fled, a and Montgomery ordered the soldiers to loot and burn the empty town. Shaw objected to this activity and complained over Montgomery’s head that burning and looting were not suitable activities for his model regiment. Later on that year the battle of Fort Wagner will make them heroes. Research more about this great American Civil War Unit and all of the Black units that served during The Civil War and tell your babies. Make it a champion day!