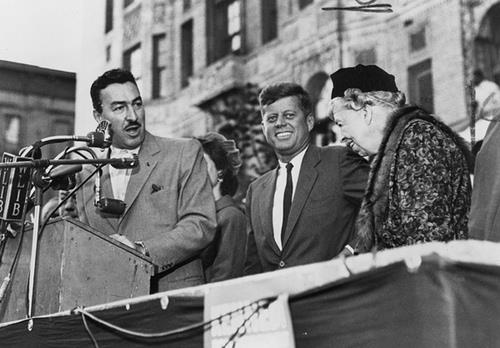 GM – FBF – “The black masses must demand and refuse to accept nothing less than that proportionate percentage of the political spoils such as jobs, elective offices and appointments… They must reject the shameful racial tokenism that characterizes the political life of America today. – Adam Clayton Powell, Jr. (U.S. Congressman – NY – D)

Powell was the son of the pastor of the Abyssinian Baptist Church in Harlem, New York City. Brought up in a middle-class home, he received his B.A. from Colgate University (Hamilton, N.Y.) in 1930 and his M.A. from Columbia University in 1932. He succeeded his father as pastor of the Abyssinian Baptist Church in 1937 and eventually built up its membership to 13,000 people. With the church as his power base, Powell was able to build a formidable public following in Harlem through his crusades for jobs and housing for the poor. He won election to the New York City Council in 1941, becoming the first black man to serve on that body. In 1945 he won election to the U.S. House of Representatives as a Democrat from Harlem. There he began a long fight against racial segregation. He served 11 successive terms in the House and became chairman of its Education and Labor Committee in 1960. In that capacity he played a leading role in the passage of a minimum wage act, antipoverty acts, and bills supporting manpower training and federal aid to education, about 50 major pieces of social legislation in all.

Powell’s outspoken opposition to racism and his flamboyant lifestyle made him enemies, however, and in the early 1960s he became involved in a lawsuit with a woman who claimed he had wrongly accused her of collecting police graft. He was cited for contempt of court in 1966 for refusing to pay damages, and in 1967 the House voted to deprive him of his seat. He was nevertheless reelected in his district in 1968 but was then deprived by his colleagues in the House of his committee chairmanship and his seniority. In 1969 the U.S. Supreme Court decided that the action of the House in depriving him of his seat had been unconstitutional, but by that time Powell’s health was failing. After his defeat in the Democratic primary election of 1970, he resigned as pastor of the Abyssinian Baptist Church in 1971 and retired to the island of Bimini in The Bahamas. Research more about this American Hero and share with your babies. Make it a champion day! I am speaking at Kennasaw State Univerity and will not be able to respond to any posts today. Peace!