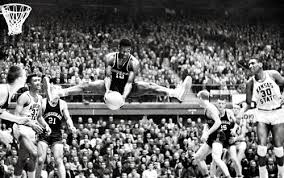 GM – FBF – “Success is a result of consistent practice of winning skills and actions. There is nothing miraculous about the process. There is no luck involved.” – Bill Russell

Remember – “I hope I epitomize the American dream. For I came against long odds, from the ghetto to the very top of my profession. I was not immediately good at basketball. It did not come easy. It came as the result of a lot of hard work and self-sacrifice. The rewards, where they worth it? One thousand times over.” – Bill Russell

Today in our History – April 18,1966 – Bill Russell is announced to the press as coach of the Boston Celtics basketball team and became the first Black to coach an established team in professional athletics.

William Felton Russell (born February 12, 1934) is an American retired professional basketball player. Russell played center for the Boston Celtics of the National Basketball Association (NBA) from 1956 to 1969. A five-time NBA Most Valuable Player and a twelve-time All-Star, he was the centerpiece of the Celtics dynasty, winning eleven NBA championships during his thirteen-year career. Russell ties the record for the most championships won by an athlete in a North American sports league (with Henri Richard of the National Hockey League). Before his professional career, Russell led the University of San Francisco to two consecutive NCAA championships in 1955 and 1956, and he captained the gold-medal winning U.S. national basketball team at the 1956 Summer Olympics.

Russell is widely considered as one of the greatest basketball players in NBA history. He was 6 ft 10 in (2.08 m) tall, with a 7 ft 4 in (2.24 m) wingspan. His shot-blocking and man-to-man defense were major reasons for the Celtics’ domination of the NBA during his career. He also inspired his teammates to elevate their own defensive play. Russell was equally notable for his rebounding abilities. He led the NBA in rebounds four times, had a dozen consecutive seasons of 1,000 or more rebounds, and remains second all-time in both total rebounds and rebounds per game. He is one of just two NBA players (the other being prominent rival Wilt Chamberlain) to have grabbed more than 50 rebounds in a game. Russell was never the focal point of the Celtics’ offense, but he did score 14,522 career points and provided effective passing.

Russell played in the wake of pioneers like Earl Lloyd, Chuck Cooper, and Sweetwater Clifton, and he was the first African American player to achieve superstar status in the NBA. He also served a three-season (1966–69) stint as player-coach for the Celtics, becoming the first African-American coach in North American pro sports and the first to win a world championship. In 2011, Barack Obama awarded Russell the Presidential Medal of Freedom for his accomplishments on the court and in the Civil Rights Movement.

Russell is one of seven players in history to win an NCAA Championship, an NBA Championship, and an Olympic gold medal. He was inducted into the Naismith Memorial Basketball Hall of Fame and the National Collegiate Basketball Hall of Fame. He was selected into the NBA 25th Anniversary Team in 1971 and the NBA 35th Anniversary Team in 1980, and named as one of the 50 Greatest Players in NBA History in 1996, one of only four players to receive all three honors. In 2007, he was enshrined in the FIBA Hall of Fame. In Russell’s honor the NBA renamed the NBA Finals Most Valuable Player trophy in 2009: it is now the Bill Russell NBA Finals Most Valuable Player Award. Many talk about who is the GOAT in Professional Basketball but to be a player – coach and win an NBA Championship, no one after Bill has done that. Research more about this great American and share with your babies. Make it a champion day!