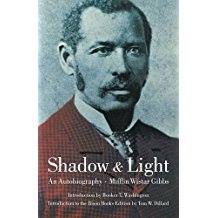 GM – FBF- ” Tell me and I forget. Teach me and I remember. Involve me and I learn.” – Mifflin Wister Gibbs

Remember – “Thank God for Canada! In the context of this narrative [in Underground] and beyond, Canada was certainly an additional option for the many traveling the treacherous terrain of the Underground Railroad in pursuit of what was perceived as “freedom.” – Mifflin Wister Gibbs

Born in Philadelphia, Pennsylvania on April 17, 1823, Mifflin Wistar Gibbs apprenticed as a carpenter. By his early 20s he was an activist in the abolition movement, sharing platforms with Frederick Douglass and helping in the Underground Railroad. Black intellectual ferment of the era gave him a superb education outside the classroom, and he became a powerful writer. In 1850 he migrated to San Francisco, California; starting as a bootblack, he was soon a successful merchant, the founder of a black newspaper, Mirror of the Times, and a leading member of the city’s black community.

In 1858 Gibbs moved to Victoria in what is now British Columbia, part of a mass migration of black men and women seeking equality under the British flag. Again he prospered, first as a merchant, then as a property developer, contractor, and elected politician. In 1866 Gibbs was elected to the Victoria (BC) City Council becoming the second black elected official in Canada and only the third elected anywhere on the North American continent.

Gibbs briefly returned to the US in 1859 to court and marry Maria Alexander, who had studied at Oberlin College. In developing a coal mine in the Queen Charlotte Islands in 1869-70, he built British Columbia’s first railroad. A tireless advocate for the black community, he helped to organize the colony’s first militia, an all-black unit known as the African Rifles. As an elected delegate to the Yale Convention, he also helped to frame the terms by which British Columbia entered the Canadian confederation.

Mifflin and Maria Gibbs separated in the late 1860s. Returning to the United States in 1870, Gibbs studied law in Oberlin, Ohio (where his wife Maria had settled, and where four of their five children graduated from Oberlin College). He toured the Reconstruction South and settled in Little Rock, Arkansas, soon becoming the first black elected municipal judge in the United States. His long and sometimes dangerous efforts on behalf of the Republican Party earned him an ambiguous reward: at the age of 74, Republican President William McKinley in 1897 named Gibbs U.S. consul in Tamatave, Madagascar. After four years Gibbs resigned in 1901 at 78 for health reasons. He returned to publish an autobiography, Shadow and Light, in 1902, with an introduction by Booker T. Washington.

Back in Little Rock, Gibbs launched Capital Citiy Savings Bank, became a partner in the Little Rock Electric Light Company, gained control of several pieces of local real estate, and supported various philanthropic causes. He died in Little Rock on July 11, 1915 at the age of 92. Research more about blacks moving to Canada and share with your babies. Make it a champion day! I won’t be able to respond to any posts today – Speaking at Apalachee High School – Winder, GA. – Thanks for all of your support with the daily History Lessons, I thank You and make it a champion day!