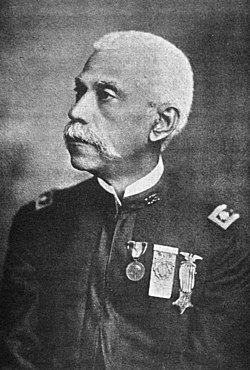 Remember – “Can I be of any service to your committee as a speaker driving the campaign?” – Allen Allensworth

Allen Allensworth (7 April 1842 – 14 September 1914), born into slavery in Kentucky, escaped during the American Civil War and became a Union soldier; later he became a Baptist minister and educator, and was appointed as a chaplain in the United States Army. He was the first African American to reach the rank of lieutenant colonel. He planted numerous churches, and in 1908 founded Allensworth, California, the only town in the state to be founded, financed and governed by African Americans.

After the army, Allensworth and his family settled in Los Angeles. He was inspired by the idea of establishing a self-sufficient, all-black California community where African Americans could live free of the racial discrimination that pervaded post-Reconstruction America. His dream was to build a community where black people might live and create “sentiment favorable to intellectual and industrial liberty.”

In 1908, he founded Allensworth in Tulare county, about thirty miles north of Bakersfield, in the heart of the San Joaquin Valley. The black settlers of Allensworth built homes, laid out streets, and put up public buildings. They established a church, and organized an orchestra, a glee club, and a brass band.

The Allensworth colony became a member of the county school district and the regional library system and a voting precinct. Residents elected the first African-American Justice of the Peace in post-Mexican California. In 1914, the California Eagle reported that the Allensworth community consisted of 900 acres (360 ha) of deeded land worth more than US$112,500.

Allensworth soon developed as a town, not just a colony. Among the social and educational organizations that flourished during its golden age were the Campfire Girls, the Owl Club, the Girls’ Glee Club, and the Children’s Savings Association, for the town’s younger residents, while adults participated in the Sewing Circle, the Whist Club, the Debating Society, and the Theater Club. Col. Allensworth was an admirer of the African-American educator Booker T. Washington, who was the founding president and longtime leader of the Tuskegee Institute in Alabama. Allensworth dreamed that his new community could be self-sufficient and become known as the “Tuskegee of the West”.

The Girls’ Glee Club was modeled after the Jubilee Singers of Fisk University, who had toured internationally. They were the community’s pride and joy. All the streets in the town were named after notable African Americans and/or white abolitionists, such as Sojourner Truth, Frederick Douglass, poet Paul Lawrence Dunbar, and Harriet Beecher Stowe, abolitionist and author of Uncle Tom’s Cabin.

The dry and dusty soil made farming difficult. The drinking water became contaminated by arsenic as the water level fell.

The year 1914 also brought a number of setbacks to the town. First, much of the town’s economic base was lost when the Santa Fe Railroad moved its rail stop from Allensworth to Alpaugh. In September, during a trip to Monrovia, California, Colonel Allensworth was crossing the street when he was struck and killed by a motorcycle. The town refuses to die. The downtown area is now preserved as Colonel Allensworth State Historic Park where thousands of visitors come from all over California to take part in the special events held at the park during the year. The area outside the state park is also still inhabited.

Allensworth is the only California community to be founded, financed and governed by African Americans. The founders were dedicated to improving the economic and social status of African Americans. Uncontrollable circumstances, including a drop in the area’s water table, resulted in the town’s decline. Research more about Black towns in America and Share with your babies. Make it a champion day!