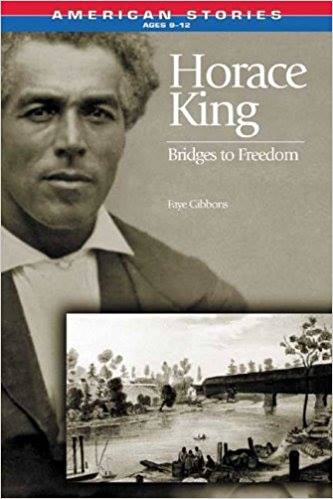 GM – FBF – Happy Memorial Day, Horace King did a lot of things during his lifetime but will be rememberd as a builder of bridegs. Enjoy!

Remember – I loved to build bridges in order for the every day person could have an easier travel. – Horace King

Today in our History – May 28, 1885 – Horace King dies after leaving a great mark on Alabama, Georgia’s history.

Horace King, born a slave on September 8, 1807 in Chesterfield District, South Carolina, was a successful bridge architect and builder in West Georgia, Northern Alabama and northeast Georgia in the period between the 1830s and 1870s. King worked for his master, John Godwin who owned a successful construction business. Although King was a slave, Godwin treated him as a valued employee and eventually gave him considerable influence over his business. Horace King supervised many of Godwin’s business activities including the management of construction sites. In 1832, for example, King led a construction crew in building Moore’s Bridge, the first bridge crossing the lower Chattahoochee River in northwest Georgia. Later in the decade, Godwin and King constructed some of the largest bridges in Georgia, Alabama, and Northeastern Mississippi. By the 1840s King designed and supervised construction of major bridges at Wetumpka, Alabama and Columbus, Mississippi without Godwin’s supervision. Godwin issued five year warranties on his bridges because of his confidence in King’s high quality work.

In 1839, Horace King married Frances Thomas, a free African American woman. The couple had had four boys and one girl. The King children eventually joined their father at working on various construction projects. In addition to building bridges, King constructed homes and government buildings for Godwin’s construction company. In 1841, King supervised the construction of the Russell County Courthouse in Alabama. Despite the success of the company in attracting work, Godwin nonetheless fell into debt. King was emancipated by Godwin on February 3, 1846 to avoid his seizure by creditors. King continued to work for Godwin’s construction company and when his former owner died in 1859, King assumed controlled of Godwin’s business.

During the Civil War, King continued to work on construction projects usually for the Confederacy including a building for the Confederate navy near Columbus, Georgia. Confederate officials also forced King to block several waterways to prevent Union access to strategic points in Georgia and Alabama.

In 1864 Frances Thomas King died. Immediately after the Civil War ended King married Sarah Jane Jones McManus. Also after the war King began to prosper as he worked on the reconstruction of bridges, textile mills, cotton warehouses and public buildings destroyed during the conflict. After passing down the family business to his son, John Thomas King, Horace King was elected as a Republican to the Alabama House of Representatives, serving from 1870 to 1874.

Horace King died on May 28, 1885 in LaGrange, Georgia. Reserach more about this great American and share with your babies, Make it a champion day!