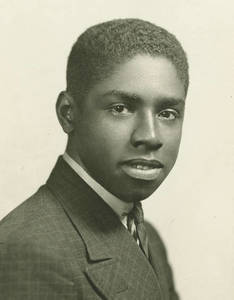 GM -FBF – Today we are going back home to New Jersey with a black man who was born in Pennsauken and graduated from the “”Castle on the Hill” – Camden High School. Enjoy!

Harold Amos (September 7, 1918 – February 26, 2003) was an American microbiologist and professor. He taught at Harvard Medical School for nearly fifty years and was the first African-American department chair of the school.

Amos was born in Pennsauken, New Jersey to Howard R. Amos Sr., a Philadelphia postman, and Iola Johnson. He attended a segregated school and graduate first in his class from Camden High School in New Jersey. He graduated from Springfield College with a baccalaureate. Amos was drafted into the U.S. Army, serving in the Quartermaster’s Corps in World War II as a warrant officer, eventually discharged in February 1946. In the fall of 1946 Amos enrolled in the biological sciences graduate program at Harvard Medical School, earning an MA in 1947 and graduated with a PhD from Harvard Medical School in 1952. Upon completing a Fulbright Scholarship, Amos joined the Harvard Medical School faculty in 1954. He was the chairman of the bacteriology department from 1968 to 1971 and again from 1975 to 1978. In 1975, he was named the Maude and Lillian Presley professor of microbiology and molecular genetics. He was a presidential advisor to Richard Nixon, a Fellow of the American Academy of Arts and Sciences (1974), the Institute of Medicine and the American Association for the Advancement of Science. Amos was awarded the National Academy of Sciences’ Public Welfare Medal in 1995 and the Harvard Centennial Medal in 2000. He directed the Minority Medical Faculty Development Program (MMFDP) of the Robert Wood Johnson Foundation after his retirement from Harvard. A diversity award at Harvard Medical School is named after Amos. He inspired hundreds of minorities to become medical doctors. Amos’s research focused on using cells in culture to understand how molecules get into cells and how entry is regulated during cell starvation or in plentiful conditions. Amos published over seventy scientific papers. He was well known as an inviting and welcoming mentor to both students and junior faculty members. He spoke fluent French and was a devoted Francophile. Research more about this great American and share with your babies and make it a champion day!