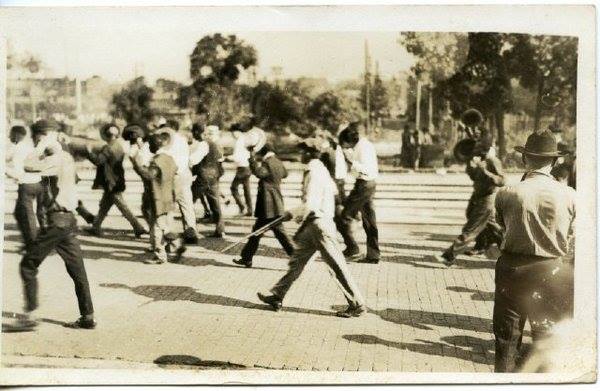 GM – FBF – What is the definition of a Riot – a noisy, violent public disorder caused by a group or crowd of persons, as by a crowd protesting against another group, a government policy, etc., in the streets.- What is the definition of a Massacre – the unnecessary, indiscriminate killing of a large number of human beings or animals, as in barbarous warfare or persecution or for revenge or plunder. Read the story and you tell me what happened in Tulsa, OK during the days on May 31 and June 2, 1921. THIS IS A STORY NOT TOLD AND HONORED ENOUGH. PEACE!

Remember – ” It was terrifying like what my grandparents use to talk about during slavery. We could not stop the waves of bombs, gunfire and total hate towards our people. No one should have to live like that” – Tulsa Resident

Tulsa race riot of 1921, race riot that began on May 31, 1921, in Tulsa, Oklahoma, and was one of the most severe incidents of racial violence in U.S. history. Lasting for two days, the riot left somewhere between 30 and 300 people dead, mostly African Americans, and destroyed Tulsa’s prosperous black neighbourhood of Greenwood, known as the “black Wall Street.” More than 1,400 homes and businesses were burned, and nearly 10,000 people were left homeless. Despite its severity and destructiveness, the Tulsa race riot was barely mentioned in history books until the late 1990s, when a state commission was formed to document the incident.

On May 30, 1921, Dick Rowland, a young African American shoe shiner, was accused of assaulting a white elevator operator named Sarah Page in the elevator of a building in downtown Tulsa. The next day the Tulsa Tribune printed a story saying that Rowland had tried to rape Page, with an accompanying editorial stating that a lynching was planned for that night. That evening mobs of both African Americans and whites descended on the courthouse where Rowland was being held. When a confrontation between an armed African American man, there to protect Rowland, and a white protestor resulted in the death of the latter, the white mob was incensed, and the Tulsa riot was thus ignited.

Over the next two days, mobs of white people looted and set fire to African American businesses and homes throughout the city. Many of the mob members were recently returned World War I veterans trained in the use of firearms and are said to have shot African Americans on sight. Some survivors even claimed that people in airplanes dropped incendiary bombs.

When the riot ended on June 1, the official death toll was recorded at 10 whites and 26 African Americans, though many experts now believe at least 300 people were killed. Shortly after the riot there was a brief official inquiry, but documents related to the riot disappeared soon afterward. The event never received widespread attention and has been noticeably absent from the history books used to teach Oklahoma schoolchildren.

In 1997 a Tulsa Race Riot Commission was formed by the state of Oklahoma to investigate the riot and formally document the incident. Members of the commission gathered accounts of survivors who were still alive, documents from individuals who witnessed the riots but had since died, and other historical evidence. Scholars used the accounts of witnesses and ground-piercing radar to locate a potential mass grave just outside Tulsa’s Oaklawn Cemetery, suggesting the death toll may be much higher than the original records indicate. In its preliminary recommendations, the commission suggested that the state of Oklahoma pay $33 million in restitution, some of it to the 121 surviving victims who had been located. However, no legislative action was ever taken on the recommendation, and the commission had no power to force legislation. In April 2002 a private religious charity, the Tulsa Metropolitan Ministry, paid a total of $28,000 to the survivors, a little more than $200 each, using funds raised from private donations. There is a lot more to this story and should be a major movie on the BIG screen, please research more about this massacre and share with your babies. Make it a champion day!