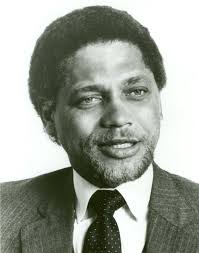 GM –FBF – Today, I want to share a story with you, it begins with me being the advisor to the SGA at Junior High School Number 3 in Trenton, N.J. and I along with other students, facility, parents/guardians and citizens of Trenton listening to our Governor Tom Kean deliver the commencement address.

THE FIRST TIME A SITTING GOVERNOR gave a commencement address to a Trenton, N.J. school. I was awarded “Teacher of the year” for Mercer County but I was also (RIF)’ed reduction of force from the Trenton School System. I was blessed that Ewing High School took me in as a History teacher and Football and Track coach. I also was advisor to my own club that I had formed while in Trenton called – The Spectrum Project.

When I had heard that Congressman Leland had died, I called my friend Rep. Donald Payne (D-NJ) who was a member of the Congressional Black Congress and asked if my club could have the rights to Mr. Leland and give awards under his lasting efforts. My students representing 6 different school districts in Mercer County, NJ went to honor “Mickey” in his home 5th Ward Texas at Phillis Whitely High School. I was proud of my students because the Governor of Texas – Ann Richards, Mayor of Houston – Kathryn J. Whitmire and Barbara Jordan – who represented Texas Southern University were there to also honor Congressman Leland. Shawn (Harris) Mitchell was one of the speakers that day and she works this day at Trenton’s Board of Education and ask her what she felt about being a member of the Spectrum Project. Enjoy “Mickey’s” story!

Remember – “In a world that has so many challenges, being fed a good meal should not be one of the challenges” – George Thomas “Mickey” Leland,

“Mickey” was America’s most effective spokesman for hungry people in the United States and throughout the world. During six terms in the Congress, six years as a Texas state legislator and, Democratic National Committee official, he focused much needed attention on issues of health and hunger and rallied support that resulted in both public and private action. Leland combined the skills of the charismatic leader with the power of a sophisticated behind-the-scenes congressman. He matured during his years in Congress into a brilliantly effective and influential advocate for food security and health care rights for every human being. When Mickey Leland died in 1989, he was Chairman of the House Select Committee on Hunger. His committee studied the problems associated with domestic and international hunger and then delivered the practical solution of food.

George Thomas “Mickey” Leland, III, was born on November 27, 1944, in Lubbock, Texas, to Alice and George Thomas Leland, II. At an early age, he, along with his mother and brother (William Gaston Leland), took up residence in the Fifth Ward of Houston, Texas.

Congressman Leland was elected in November 1978 to the United States House of Representatives from the 18th Congressional District of Houston, Texas. His Congressional district included the neighborhood where he had grown up, and he was recognized as a knowledgeable advocate for health, children and the elderly. His leadership abilities were quickly noted in Washington, and he was chosen Freshman Majority Whip in his first term, and later served twice as At-Large Majority Whip. Leland was re-elected to each succeeding Congress until his death in August 1989.

Mickey Leland’s sincere concern for ethnic equality earned him a leadership position in politics. During 1985-86, Congressman Leland served as Chairman of the Congressional Black Caucus (CBC) for the 99th Congress. The CBC was created in 1971 with only 13 members. By 1987, the CBC had grown to 23 members. Leland was also a member of the Democratic National Committee (DNC) from 1976-85. He served as Chairman of the DNC’s Black Caucus from 1981-1985, and in that capacity, he served on the DNC’s Executive Committee.

When running for re-election in 1988, Congressman Leland was quoted as saying, “This is my 10th year in Congress, and I want to go back.” He stated further, “The more influence I get, the more I can help the people of the 18th District, but also (people) throughout the country.” Leland was becoming increasingly successful in international human rights and world hunger issues. He fought against the injustice of South African Apartheid, and led successful boycotts against South Africa Airways and was instrumental in obtaining a congressional override of President Reagan’s veto of economic sanctions against South Africa.

Mickey Leland died as he had lived, on a mission seeking to help those most in need. While leading another relief mission in 1989, to an isolated refugee camp, Fugnido, in Ethiopia, which sheltered thousands of unaccompanied children fleeing the civil conflict in neighboring Sudan, Leland’s plane crashed into a mountainside in Ethiopia. The force of the crash killed everyone aboard, including the Congressman, his chief of staff Patrice Johnson, and 13 other passengers from a number of government, humanitarian, and development organizations.
George Thomas “Mickey” Leland ▪ Born November 27, 1944, Lubbock, TX▪ Died August 8,1989, Gambela, Ethiopia. Resersh more about the great Amerivan and share with your babies. Make it a cahmpion day1