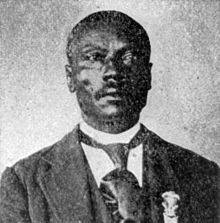 GM – FBF – Today, I want to share with you one of the brave Black Men who represented us as a Buffalo Soldier after the Civil War and Reconstruction. The time that the Country was completing the extermination of the Native Americans or as it was called “The Indian Wars”. Even though the 13th, 14th and 15th amendments to the U.S. Constitution; known collectively as the Civil War Amendments were passed, the Black race in America was still considered to be second class citizens in many parts of the country as the “ERA OF JIM CROW” had begun. So let’s have the black man get rid of the red man.

Even our American History supports the strong efforts of the contributions and heroism of the Buffalo Soldiers by 1890, the state of Louisiana passed the Separate Car Act, which required separate accommodations for blacks and whites on railroads, including separate railway cars. This would be heard by the Supreme Court in 1896 and Plessy v. Ferguson, will be the law of the land until the 1960’s. Teach yourself and your babies our part of this American History. Remember and enjoy!

Remember – “The earth and the horse moved as it should be and the warrior that the blue coats send to defeat us we respect as our God – (Wakan Tanka – The Great Spirit) asked us too. I have no Battle with the Buffalo Soldier” – Sitting Bull – Hunk papa Lakota holy man & leader

Today in our History – August 12, 1880 – George Jordan was awarded the Medal of Honor for gallantry in battle at Fort Tularosa, New Mexico.

George Jordan, buffalo soldier and Medal of Honor recipient, hailed from rural Williamson County in central Tennessee. Enlisting in the 38th Infantry Regiment on 25 December 1866, the short and illiterate Jordan proved a good soldier. In January 1870, he transferred to the 9th Cavalry’s K Troop, his home for the next twenty-six years. Earning the trust of his troop commander, Captain Charles Parker, Jordan was promoted to corporal in 1874; by 1879, he wore the chevrons of a sergeant. It was during these years that Jordan learned how to read and write, an accomplishment that certainly facilitated his advancement in the Army.

On 14 May 1880, following a difficult forced march at night, a twenty-five man detachment under Jordan successfully repulsed a determined attack on old Fort Tularosa, New Mexico, by more numerous Apaches. The next year on 12 August, still campaigning against the Apaches, Jordan’s actions contributed to the survival of a detachment under Captain Parker when they were ambushed in Carrizo Canyon, New Mexico. Although neither engagement received much attention initially, in 1890 Jordan was awarded a Medal of Honor for Tularosa and a Certificate of Merit for Carrizo Canyon.

By the time of his retirement in 1896 at Fort Robinson, Jordan had served ten years as first sergeant of a veteran troop renowned for its performance against the Apache and Sioux. Jordan joined other buffalo soldier veterans in nearby Crawford, Nebraska, and became a successful land owner, although his efforts to vote bore little fruit.

Jordan’s health declined dramatically in the autumn of 1904 but Jordan was denied admission to the Fort Robinson’s hospital. Told to try the Soldiers’ Home in Washington, D.C., he died 19 October, the post chaplain officially complaining that Jordan “died for the want of proper attention.” Jordan was buried in the Fort Robinson cemetery, his funeral conducted with full honors and attended by most of the post’s personnel, a bittersweet ending to the story of an exemplary buffalo soldier. Research more about these great Americans and share with your babies. Make it a champion day!