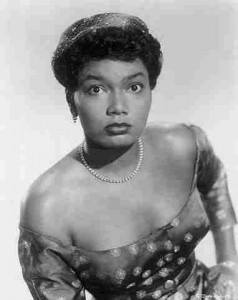 GM – FBF- Today, America is still morning the passing of “The Queen of Soul” Aretha Franklin yesterday and more will be said and shared with her and her family over the week. Did you know that there was a Black female entertainer who sung, played as an actress in Hollywood and performed on Broadway, besides staring in her own television show and sat in as guest host more than once for Johnny Carson of the famed “Tonight Show”? She also shared the stage with Aretha Franklin on many occasions. We who lived in and around Philadelphia and South Jersey saw her more than others as she frequent Atlantic City and The Latin Casino in Cherry Hill, NJ. She was known effectually as “PEARL”. Enjoy!

Remember – “Never, never rest contented with any circle of ideas, but always be certain that a wider one is still possible.” Pearl Bailey

Legendary entertainer Pearl Mae Bailey was born on March 29, 1918 in Southamption County, Virginia to Rev. Joseph and Ella Mae Bailey. She grew up in Newport News, Virginia. Bailey began her acting and singing career early at the age of 15 with her debut performance at an amateur contest at Philadelphia’s Pearl Theater. Encouraged to enter the contest by her older brother, Bill Bailey, an aspiring tap dancer, Pearl Bailey won first prize in the competition.

After winning a similar contest at Harlem’s Apollo Theater, Bailey decided to start performing as a professional. In the 1930s she took jobs singing and dancing in Philadelphia’s black nightclubs. After the start of World War II, Bailey decided to tour the country with the USO where she performed for US troops. The USO performances spread her name and reputation across the country.

After the war ended Bailey moved to New York. She continued to perform in nightclubs but she also garnered a recording contract and now went on tour to promote her music. Her 1952 recording, “Takes Two to Tango,” was one of the top songs of the year. In 1946 Bailey made her Broadway debut in St. Louis Woman where she played the role of Hagar in a cast that also included Mahalia Jackson, Eartha Kitt and Nat King Cole. Although Bailey performed on stage she still performed in concert tours. On November 9, 1952, Bailey married jazz drummer Louie Bellson in London.

In 1954 Bailey made her film debut as a supporting actress in Carmen Jones. Playing the character, Frankie, she was most remembered for her rendition of “Beat Out That Rhythm on the Drum. Bailey also starred in the Broadway musical House of Flowers in 1954. By 1959 she was considered a leading African American actor and starred in films such as Porgy and Bess with Sidney Poitier and Dorothy Dandridge.

In 1970, Bailey, a lifelong Republican, was appointed by President Richard Nixon as America’s “Ambassador of Love.” In that post she attended several meetings at the United Nations. She later made a television commercial for President Gerald Ford in the 1976 election.

Although Bailey continued to release records and star in various films through the 1960s, had a short-lived television series in the early 1970s, her most celebrated entertainment achievement came in 1975 when she returned to the stage to star in an all-black production of Hello Dolly where she won a Tony Award.

While taking a break from acting, Bailey went back to school and earned a B.A. in theology from Georgetown University in 1985. In 1987 Bailey won an Emmy Award for her performance in an ABC Afterschool Special, Cindy Eller: A Modern Fairy Tale. The following year she was awarded the Presidential Medal of Freedom by President Ronald Reagan.
On August 17, 1990, Pearl Mae Bailey died in Philadelphia from coronary artery disease. She was 72. Research more about this great American and share with your babies. Make it a champion day!