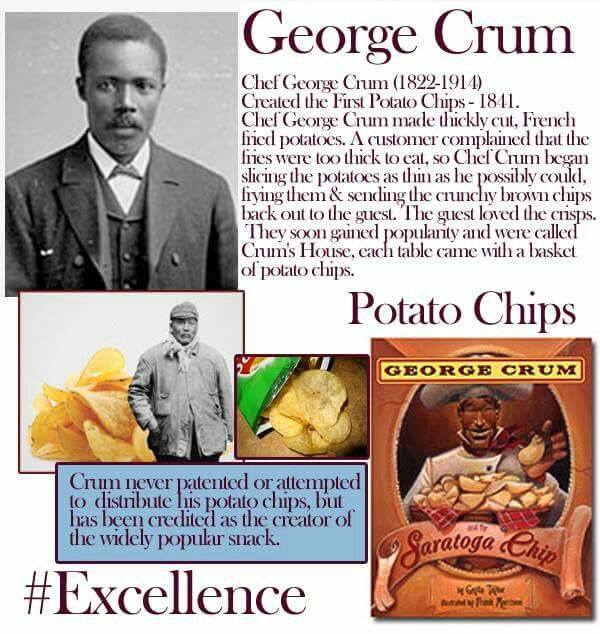 GM – FBF – Today I would like to share with you a story that you all love or his Invention anyway. You love it so much that your parents introduced it to you and you have welcomed it to your family. It was a hard road for this Black man but he overcame the odds. Enjoy!

Remember – ” Who would have thought that potato shavings would be a treat for the world. – George Crum

George Speck (also called George Crum; 1824– July 22, 1914) was an American chef. He worked as a hunter, guide, and cook in the Adirondack mountains, and became renowned for his culinary skills after being hired at Moon’s Lake House on Saratoga Lake, near Saratoga Springs, New York.

Speck’s specialities included wild game, especially venison and duck, and he often experimented in the kitchen. During the 1850s, while working at Moon’s Lake House in the midst of a dinner rush, Speck tried slicing the potatoes extra thin and dropping it into the deep hot fat of the frying pan. Although recipes for potato chips were published in several cookbooks decades prior to the 1850s, a local legend associates Speck with the creation of potato chip.

Speck was born on July 15, 1824 in Saratoga County in upstate New York. Some sources suggest that the family lived in Ballston Spa or Malta; others suggest they came from the Adirondacks. Depending upon the source, his father, Abraham, and mother Diana, were variously identified as African American, Oneida, Stockbridge, and/or Mohawk. Some sources associate the family with the St. Regis (Akwesasne) Mohawk reservation that straddles the US/Canada border. Speck and his sister Kate Wicks, like other Native American or mixed-race people of that era, were variously described as “Indian,” “Mulatto,” “Black,” or just “Colored,” depending on the snap judgement of the census taker.

Speck developed his culinary skills at Cary Moon’s Lake House on Saratoga Lake, noted as an expensive restaurant at a time when wealthy families from Manhattan and other areas were building summer “camps” in the area. Speck and his sister, Wicks, also cooked at the Sans Souci in Ballston Spa, alongside another St. Regis Mohawk Indian known for his skills as a guide and cook, Pete Francis. One of the regular customers at Moon’s was Commodore Cornelius Vanderbilt, who, although he savored the food, could never seem to remember Speck’s name. On one occasion, he called a waiter over to ask “Crum,” “How long before we shall eat?” Rather than take offense, Speck decided to embrace the nickname, figuring that, “A crumb is bigger than a speck.”[

Speck developed his culinary skills at Cary Moon’s Lake House on Saratoga Lake, noted as an expensive restaurant at a time when wealthy families from Manhattan and other areas were building summer “camps” in the area. Speck and his sister, Wicks, also cooked at the Sans Souci in Ballston Spa, alongside another St. Regis Mohawk Indian known for his skills as a guide and cook, Pete Francis.[

One of the regular customers at Moon’s was Commodore Cornelius Vanderbilt, who, although he savored the food, could never seem to remember Speck’s name. On one occasion, he called a waiter over to ask “Crum,” “How long before we shall eat?” Rather than take offense, Speck decided to embrace th e nickname, figuring that, “A crumb is bigger than a speck.” a yed no favorites.” Guests were obliged to wait their turn, the millionaire as well as the wage-earner. Mr. Vanderbilt once was obliged to wait an hour and a half for a meal…With none but rich pleasure-seekers as his guests, Speck kept his tables laden with the best of everything, and for it all charged Delmonico prices.”[

Recipes for frying potato slices were published in several cookbooks in the 19th century. In 1832, a recipe for fried potato “shavings” was included in a United States cookbook derived from an earlier English collection. William Kitchiner’s The Cook’s Oracle (1822), also included techniques for such a dish. Similarly, N.K.M. Lee’s cookbook, The Cook’s Own Book (1832), has a recipe that is very similar to Kitchiner’s.

The New York Tribune ran a feature article on “Crum’s: The Famous Eating House on Saratoga Lake” in December 1891, but mentioned nothing about potato chips. Neither did Crum’s commissioned biography, published in 1893, nor did one 1914 obituary in a local paper. Another obituary states “Crum is said to have been the actual inventor of “Saratoga chips.”” When Wicks died in 1924, however, her obituary authoritatively identified her as follows: “A sister of George Crum, Mrs. Catherine Wicks, died at the age of 102, and was the cook at Moon’s Lake House. She first invented and fried the famous Saratoga Chips.”

Wicks recalled the invention of Saratoga Chips as an accident: she had “chipped off a piece of the potato which, by the merest accident, fell into the pan of fat. She fished it out with a fork and set it down upon a plate beside her on the table.” Her brother tasted it, declared it good, and said, “We’ll have plenty of these.” In a 1932 interview with the Saratogian newspaper, her grandson, John Gilbert Freeman, asserted Wicks’s role as the true inventor of the potato chip.

Hugh Bradley’s 1940 history of Saratoga contains some information about Speck, based on local folklore as much as on any specific historical primary sources. In their 1983 article in Western Folklore, Fox and Banner say that Bradley had cited an 1885 article in the Hotel Gazette about Speck and the potato chips. Bradley repeated some material from that article, including that “Crum was born in 1828, the son of Abe Speck, a mulatto jockey who had come from Kentucky to Saratoga Springs and married a Stockbridge Indian woman,” and that, “Crum also claimed to have considerable German and Spanish blood.”

In any event, Speck helped popularize the potato chip, first as a cook at Moon’s and then in his own place. Cary Moon, owner of Moon’s Lake House, later rushed to claim credit for the invention, and began mass-producing the chips, first served in paper cones, then packaged in boxes. They became wildly popular: “It was at Moon’s that Clio first tasted the famous Saratoga chips, said to have originated there, and it was she who first scandalized spa society by strolling along Broadway and about the paddock at the race track crunching the crisp circlets out of a paper sack as though they were candy or peanuts. She made it the fashion, and soon you saw all Saratoga dipping into cornucopias filled with golden-brown paper-thin potatoes; a gathered crowd was likely to create a sound like a scuffling through dried autumn leaves.” Visitors to Saratoga Springs were advised to take the 10-mile journey around the lake to Moon’s if only for the chips: “the hobby of the Lake House is Fried Potatoes, and these they serve in good style. They are sold in papers like confectionary.”

A 1973 advertising campaign by the St. Regis Paper Company, which manufactured packaging for chips, featured an ad for Speck and his story, published in the national magazines, Fortune and Time. During the late 1970s, the variant of the story featuring Vanderbilt became popular because of the interest in his wealth and name, and evidence suggests the source was an advertising agency for the Potato Chip/Snack Food Association.

A 1983 article in Western Folklore identifies potato chips as having originated in Saratoga Springs, New York, while critiquing the variants of popular stories. In all versions, the chips became popular and subsequently known as “Saratoga chips” or “potato crunches”.

The 21st-century Snopes website writes that Crum’s customer, if he existed, was more likely an obscure one. Vanderbilt was indeed a regular customer at both Crum’s Malta restaurant and Moon’s Lake House, but there is no evidence that he played a role by requesting or promoting potato chips. Research more about Black Inventors and share with your babies. Make it a champion day!