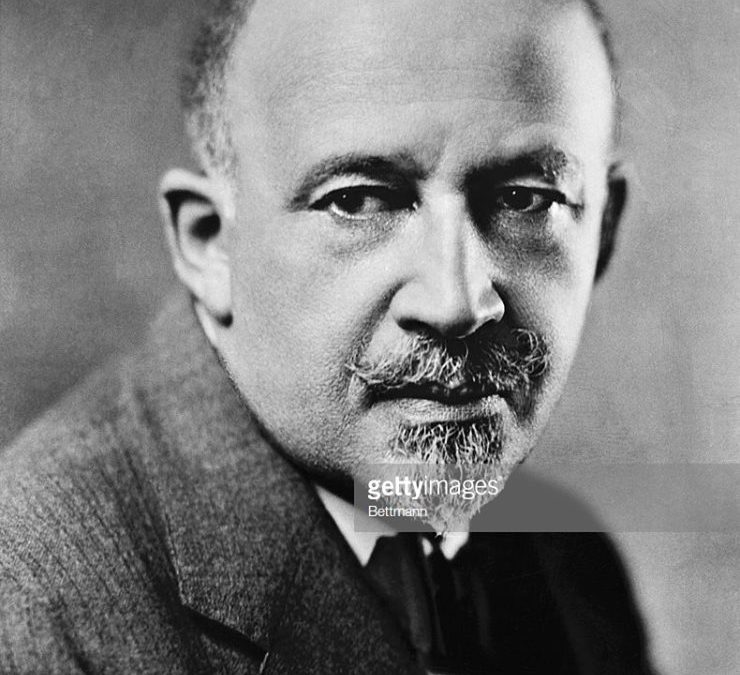 GM – FBF – Today I would like to share with you a story of one of the greatest Black people in our time. Many know of his story but just in case you don’t by the end of the reading you will. Enjoy!

Educator, essayist, journalist, scholar, social critic, and activist W.E.B. DuBois, was born to Mary Sylvina Burghardt and Alfred Dubois on February 23, 1868 in Great Barrington, Massachusetts. He excelled in the public schools of Great Barrington, graduating valedictorian from his high school in 1884. Four years later he received a B.A. from Fisk University in Nashville, Tennessee. In 1890 DuBois earned a second bachelor degree from Harvard University. DuBois began two years of graduate studies in History and Economics at the University of Berlin in Germany in 1892 and then returned to the United States to begin a two year stint teaching Greek and Latin at Wilberforce University in Ohio. I

n 1895, DuBois became the first African American to earn a Ph.D. at Harvard University. His doctoral thesis, “The Suppression of the African Slave Trade in America,” became the first book published by Harvard University Press in 1896. Later that year DuBois married Nina Gomer and the couple had two children. After the death of his first wife in 1950, DuBois married Shirley Graham who remained his wife until his death.

Before the close of the 19th century, DuBois also taught at the University of Pennsylvania and Atlanta University. During this time, he became the first scholar to systematically study African American urban life. DuBois’s first post-dissertation book, The Philadelphia Negro, released in 1899, determined that housing and employment discrimination were the principal barriers to racial equality and black prosperity in the urban North. His work and conclusions initiated the field of African American urban history.

DuBois lacked black public appeal of his contemporaries such as Booker T. Washington, Marcus Garvey, and Paul Robeson. He remained scathingly critical of white racism his entire life and unlike Washington he was unwilling to seek compromise in the quest for civil rights and racial justice. In 1903, DuBois published a groundbreaking collection of essays, The Souls of Black Folk, which challenged the civil rights strategies of black leaders like Washington while inspiring a cadre of young black activist scholars to use their work to combat racial oppression.
In 1905 DuBois and other black leaders created the Niagara Movement to provide an organizational challenge to segregation and discrimination. DuBois edited the organization’s magazines, the Moon and the Horizon. As the Niagara Movement declined, DuBois became the co-founder of the National Association for the Advancement of Colored People (NAACP) in 1909 and served as the editor of its magazine, The Crisis, until 1934 when he was fired by the organization.

DuBois’s departure from the NAACP reflected his disillusionment over the continuing power of white racism and what he felt was the compromising approach of black leaders, including his NAACP colleagues. Moreover, DuBois’s speeches and editorials made him unpopular with many whites and some blacks who, fearing white backlash, refused to support his positions on race.

DuBois, however, continued to believe scholarship could promote racial equality. He wrote numerous books and articles including Black Reconstruction in America in 1935. Largely discounted by scholars at the time, the book eventually became the basis for a dramatic reappraisal of the Reconstruction era by scholars in the 1960s and 1970s. His conclusions regarding the progress made by African Americans during the decade of Reconstruction have now been accepted by almost all mainstream historians.

By the early 1950s, at the height of the Cold War, DuBois devoted much of his energy to promoting peace between the United States and the Soviet Union. He embraced this controversial position at great personal and professional peril. His only foray into politics, a failed run in 1950 as a Socialist for the US Senate seat from New York, drew the attention of the Federal Bureau of Investigation (FBI). Stripped by the State Department of his passport in 1950 and criticized by many former allies and associates in the civil rights struggle, DuBois became a Communist, believing it offered the only hope for working class people around the world and the only major challenge to racism.

In 1961 DuBois gave up his citizenship and left the United States permanently for Accra, Ghana. With the support of Ghanaian President Kwame Nkrumah, DuBois became the editor of the proposed Africana Encyclopedia. Before the project was completed, DuBois died in Accra on August 27, 1963, on the eve of the March on Washington, the largest civil rights demonstration in the US to that date. Research more about this great American and share with your babies. Make it a champion day!