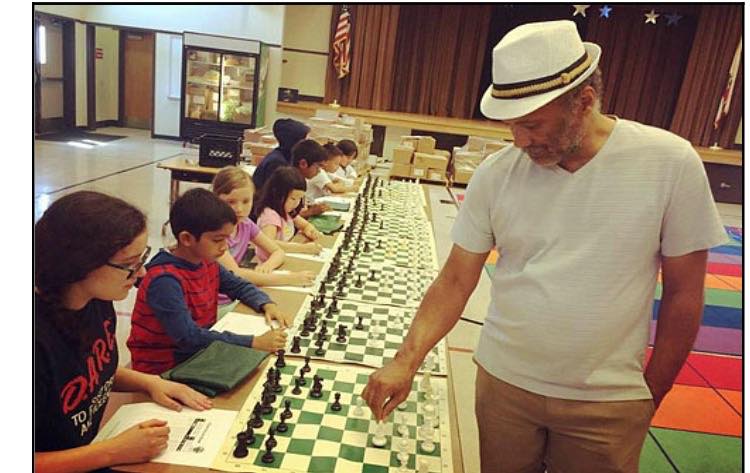 GM – FBF – Today, I would like to share with you a story that is uplifting but sad at the same time. It is about a man who enjoyed the “ART” of Chess. I played the game of chess and was good for many pickup games with family and friends or strangers at the park. This father, husband, veteran of the service and speaker of multiple languages died doing what he did best while participating in a chess tournament. Read this great true adventure of one of the best African American chess ARTISTS in the world. Enjoy!

Remember – “The beauty of chess is it can be whatever you want it to be. It transcends language, age, race, religion, politics, gender and socioeconomic background. Whatever your circumstances, anyone can enjoy a good fight to the death over the chess board.”- Emory A. Tate, Jr

When one dies, he leaves a lot of sadness in the hearts of those who knew him, and considered him a friend. This is surely the case for International Master Emory Tate. But at the same time, I cannot think of a better way to die than doing what one truly loves, and has done all his life. IM Emory Tate died while playing chess in a tournament near San Jose, California. Like a Viking, fighting and dying on the battle field, the Valkyries flew to lift his spirit, and now he is surely visiting other great chess players from history that we all keep in our hearts.

When you see your name next to Emory Tate’s on the pairings chart, adrenaline may rush through your body as you prepare face a vicious predator. One of the most feared players in the U.S., Tate had built a reputation over the years as a swashbuckling tactician who will try to slash you to bits as brilliantly as possible… and he didn’t disappoint.

Born on the west side of Chicago, but spending formative years in Indiana, (USA) Emory Tate Jr. was taught the game of chess by his father Emory Sr. Indiana is a fairly active chess state, but in the early days of stardom, Tate spent a lot of time in the Chicago area creating a buzz with his hyperactive play. If one observes closely, it is easy to get a glimpse of his brilliant mind.

Tate’s reputation received a boost while he served in the Air Force and was 5-time Armed Forces Champion. His travels have given him the opportunity to make a foray into European chess. Of course, Tate has some comfort in these environments since he is fluent in Russian and has decent command of other languages.

What is most amazing about Tate was his ability to analyze complicated variations with amazing clarity and speed. His post-mortem analysis sessions often draw huge crowds (some standing in chairs) to witness his entertaining spectacle. Tate pepper his vivid commentary with “triple exclam!” while rattling off a series of moves with a quickness. During his sessions, the crowds are spellbound by his amazing ideas, humorous barbs and incisive color commentary. He has even received generous applause after his sessions. Amazing!

Tate had a large collection of GM scalps (80 by his estimate) and many often wonder why he never achieved the rank of Grandmaster.

He also reached the 2500-rating barrier after winning the Eastern Open in December 1996. Tate qualified for participation in the prestigious 2006 U.S. Championship after a sterling performance at the 2005 National Chess Congress. His appearance was a highly-anticipated an will add a new level of excitement to the field. Tate added another chapter in his long history of accomplishments by clinching the International Master title at the 2006 World Open. For many years, Tate’s strength at this level has not been in question and as mentioned before has scored some fascinating victories. Hopefully Tatel gained more opportunities to earn GM norms so he add a final “triple exclam” to his litany of accomplishments. Tate has inspired chess players the world over, but in particular, he is considered by many players of African descent to be a legendary figure in the annals of chess history.

Born to Emma Cox Tate and Emory Andrew Tate, Sr. The five-time Armed Forces champion was a pioneering black chess master. His legendary career came to an end on October 17, 2015 as he collapsed in the middle of a tournament game. Research more about this amazing piece of American history and share with your babies. Make it a champion day!