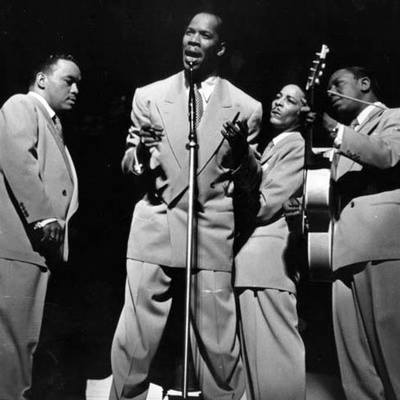 GM – FBF – Today I would like to share with you a singing group that may have been forgotten to our past history. This group was the forerunner to The Platters, Fifth Demotion and the Friends of Distention, just to name a few. They were accepted as a crossover group and made money travled the world and make movies. If you never heard of them play some of their music on YouTube. Enjoy!

Remember – “It takes a long time to write something that is easy to read.” ― Brian McDonald, Ink Spots

With a high-flying tenor floating above their tight harmonies, the Ink Spots were the predecessors of doo-wop. They became so popular that all-white venues integrated to get them in their lineup, a rare occurrence in the Forties.

n the words of soul singer Jerry Butler, a solo artist and founding member of the Impressions, “The Ink Spots were the heavyweight champions of quartet singing.”
Clyde McPhatter, one-time singer with both the Dominoes and the Drifters, once admitted, “We patterned ourselves after the Ink Spots.” One of the first popular black groups, the Ink Spots can be regarded as forerunners of the doo-wop and rhythm & blues movements that followed. In the wake of their innovative harmonies came a slew of black vocal groups, including the Ravens, the Orioles, the Dominoes and the Drifters.

The Ink Spots formed in Indianapolis in the late 1920s. The original members were Orville “Hoppy” Jones, who was born on February 17, 1905; Ivory “Deek” Watson, who was born on July 18, 1909; Jerry Daniels, who was born on December 14, 1915; and Charlie Fuqua, who was born on October 20, 1910. They had gained early experience performing with such amateur groups as the Peanut Boys, the Percolating Puppies, the Four Riff Brothers and the Swingin’ Gate Brothers. The music of these early groups was influenced by jazz and vaudeville acts.

The group’s original name was King, Jack and the Jesters. The members would improvise vocal harmonies, often simulating wind instruments with their voices. After achieving some Midwestern success as a result of live appearances on radio shows in Indianapolis, Cleveland and Cincinnati, the group relocated to New York in the early Thirties. After a legal conflict with bandleader Paul Whiteman, who had a vocal group called the King’s Jesters, King, Jack and the Jesters changed their name to the Ink Spots.

The Ink Spots made appearances at the Apollo Theater, the Savoy Ballroom and the Roxy, and they got a regular radio gig on New York’s WJZ. In 1935 they signed with RCA Records. Though none of the six recordings they made for RCA sold well, they did earn the group its first tour of England and Europe. The following year they signed a new record deal with Decca Records, and Jerry Daniels was replaced by Bill Kenny. With Watson singing lead, the group’s sound was still very much the same as when the group started out. As Kenny once said, “This style wasn’t getting the group anywhere.”

The Ink Spots were on the verge of breaking up when songwriter Jack Lawrence brought them a ballad called “If I Didn’t Care.” With Kenny singing lead, the record became a million-seller and inaugurated a string of hit ballads, including “My Prayer,” “Maybe,” “We Three,” “Whispering Grass,” “The Gypsy,” “To Each His Own” and “I Don’t Want to Set the World on Fire.” The Ink Spots toured the world and made appearances with such artists as Lucky Millinder and Glenn Miller. They also landed roles in such movies as The Great American Broadcast (1941). The group remained popular with both black and white audiences through the postwar years and into the Fifties.

During the Forties, the Ink Spots pioneered the breaking down of racial barriers by appearing in previously all-white Southern venues. In 1948 when the group headlined over several white acts at Miami’s Monte Carlo club, Billboard magazine reported: “Format is a racial departure for this territory, for even if Jim Crow laws are largely unwritten and there is no law prohibiting Negro entertainers from working in white places or with white acts, no operator in the Deep South has ever had the nerve to try it.”

By the late 1940s, however, the Ink Spots’ fortunes were beginning to change. Their musical style no longer seemed very fresh, and the group was undergoing numerous changes, beginning with Hoppy Jones’ sudden death in October 1944. There were so many internal conflicts that Bill Kenny seemed to be the only regular member of the group. By 1953 the original Ink Spots were no more.