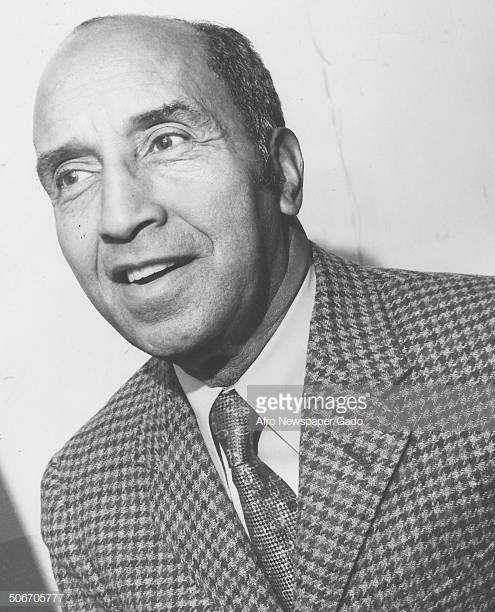 GM – FBF – Today’s story is about a black man who was meeting all of the right sports figures and entertainers of his day. During those times newspaper was king as many big cities had a morning and evening newspaper so as a sports reporter whatever you wrote in the morning could be expanded on or replaced by a bigger story that happened that day. H e was often in harm’s way because some parts of America didn’t care what your profession was to them you were still considered lower than dirt and treated that way if the circumstances were right. This outstanding writer won many awards for his work but the thing he valued the most was being the person who would get the exclusive from the athlete or entertainer. In those days they called it “GETTING THE SCOOP”. Enjoy!

Remember – “Some people didn’t understand the importance of meeting a deadline or someone reading something that no other reporter knows, I always enjoyed telling the story first.” – Sam Lacy

Lacy grew up in Washington, D.C., played semi-pro baseball, coached municipal basketball, attended Howard University, and performed assorted odd jobs before becoming a professional sportswriter. The sportswriter inherited his pioneering spirit from his grandfather, Henry Erskine Lacy, who was the first black detective on the Washington, D.C., police force. Perhaps the most amazing thing about Lacy’s story is not that he covered all the giants of the twentieth-century sporting world—Joe Louis, Jesse Owens, Jackie Robinson, Sugar Ray Robinson, and Muhammed Ali, to name a few—but that he continued to cover sports well into his nineties. Lacy’s career in print journalism began in the 1920s, working as a sports writer at the Washington Tribune under the guidance of Editor Lewis Lautier. He was managing editor and sports editor there from 1934-39, before moving to Chicago as assistant national editor for the Chicago Defender from 1940-43.

He returned to Baltimore to become a columnist and sports editor for the weekly Baltimore Afro-American Newspapers. He wrote the widely popular column “A to Z” for many years. Through 17 presidential elections this crusader in the 1930s and ’40s, devoted his columns to desegregating baseball in the major leagues. He became a renowned journalist as well as a civil rights leader. Lacy’s career in journalism began in the 1920s, working as a sports writer at the Washington Tribune under the tutelage of Editor Lewis Lautier. He was both managing editor and sports editor of the paper from 1934-1939, before moving to Chicago to become a national editor with the Chicago Defender.

He later moved to Baltimore as sports editor and columnist for the Baltimore Afro-American newspaper. Lacy, 95, has been “fighting for fairness” for Afro-American athletes for almost 65 years, railing against racism and segregation that prevailed for decades in U.S. sports, courts and legislatures. Lacy is recognized, as a pioneer in baseball journalism. He was one of the first African-American members of the Baseball Writers’ Association of America, and a 1997 recipient of the J.G. Taylor Spink Award. During his career, Lacy covered the careers of many Black athletes and numerous sporting events, including six Olympic Games.

As a result of his efforts, he has received many awards given by sports, journalism and academic establishments. In 1998, he was inducted into the “writers’ wing” of the Baseball Hall of Fame. Sam Lacy died on May 8, 2003. Research more about black journalist and share with your babies. Make it a champion day!