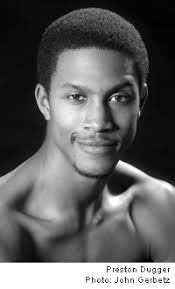 GM – FBF – Today’s story is about a man who wanted to move like no other. His style was one of a kind and no one could do the moves like he did. Enjoy!

Remember – “Nobody cares if you can’t dance well. Just get up and dance. Great dancers are great because of their passion.” – Lowell Dennis Smith

Lowell Dennis Smith, a ballet dancer and teacher who for some years was a principal dancer with the Dance Theatre of Harlem and later was director of the company’s school, died Oct. 22 at UCLA Medical Center. He was 56.

The cause of death was lung cancer, said his longtime friend Rick Frey. Smith had been dividing his time between Los Angeles and New York City.

Born in 1951 in Memphis, Tenn., he studied dance at the North Carolina School of the Arts in Winston-Salem and then performed as a dancer and actor in Memphis and later with the Eglevsky Ballet on Long Island, New York.

He joined the Dance Theatre of Harlem in the late 1970s and danced with the company for 17 years. One of his best known roles was as Stanley Kowalski in a dance adaptation by Valerie Bettis of the Tennessee Williams play “A Streetcar Named Desire.”

“Stanley screams all the time so his movement has to scream,” Smith said in a 1996 interview with the Commercial Appeal of Memphis. “Movement is as much a vocabulary as words.”

He performed the role of Stanley onstage and for a television broadcast of “Great Performances: Dance in America” in 1986.

“Lowell Smith, a superlative dramatic dancer, explodes with a typically sure and nuanced passion Floyd, all of Memphis. that makes Stanley’s anger and desire vividly immediate,” dance critic Jennifer Dunning wrote in a review of the televised performance for the New York Times.
Smith also had prominent roles in “Equus,” choreographed by Domy Reiter-Soffer, about a boy who blinded horses and the psychiatrist who treated him, as well as in “Fall River Legend,” by choreographer Agnes de Mille, about a famed murder case and the accused, Lizzie Borden.

Beyond dance drama, he performed in a number of traditional ballets and modern classics such as “The Four Temperaments” by George Balanchine.

Later in his career, Smith choreographed “Pas de Deux for Phrygia and Spartacus,” a duet that the Dance Theatre of Harlem premiered in New York City in 2001. He also created works for the company’s educational program and helped lead master classes for young students in cities around the United States.

Smith is survived by his mother, Dorothy S. Smith, and two sisters, Pamela D. Smith and June Smith. Research more about African – American dance and share with your babies. Make it a champion day!