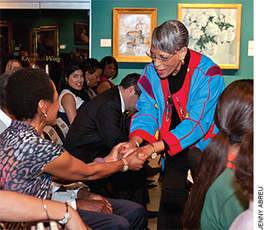 Remember – “The trouble with a woman standing behind her man is that she can’t see where she is going!” – — Johnnetta B. Cole

Johnnetta Betsch Cole (born 1936) is an American anthropologist, educator, museum director, and college president. Cole was the first female African-American president of Spelman College, a historically black college, serving from 1987 to 1997. She was president of Bennett College from 2002 to 2007. During 2009–2017 she was Director of the Smithsonian Institution’s National Museum of African Art.

Cole served as a professor at Washington State University from 1962 to 1970, where she cofounded one of the US’s first black studies programs. In 1970 Cole began working in the Department of Anthropology at the University of Massachusetts Amherst, where she served until 1982. While at the University of Massachusetts, she played a pivotal role in the development of the university’s W.E.B. Du Bois Department of African-American Studies. Cole then moved to Hunter College in 1982, and became director of the Latin American and Caribbean Studies program. From 1998 to 2001 Cole was a professor of Anthropology, Women’s Studies, and African American Studies at Emory
University in Atlanta.

n 1987, Cole was selected as the first black female president of Spelman College, a prestigious historically black college for women. She served until 1997, building up their endowment through a $113 million capital campaign, attracting significantly higher enrollment as students increased, and, overall, the ranking of the school among the best liberal arts schools went up.[11] Bill and Camille Cosby contributed $20 million to the capital campaign.

After teaching at Emory University, she was recruited as president of Bennett College for Women, also a historically black college for women. There she led another successful capital campaign. In addition, she founded an art gallery to contribute to the college’s culture. Cole is currently the Chair of the Johnnetta B. Cole Global Diversity & Inclusion Institute founded at Bennett College for Women. She is a member of Delta Sigma Theta sorority.

She was Director of the National Museum of African Art, part of the Smithsonian Institution in Washington, DC, during 2009–2017. During her directorship the controversial exhibit, “Conversations: African and African-American Artworks in Dialogue,” featuring dozens of pieces from Bill and Camille Cosby’s private art collection was held in 2015, coinciding with accusations of sexual assault against the comedian.

Cole has also served in major corporations and foundations. Cole served for many years as board member at the prestigious Rockefeller Foundation. She has been a director of Merck & Co. since 1994. She is the first woman elected to the board of Coca-Cola. From 2004 to 2006, Cole was the Chair of the Board of Trustees of United Way of America and is on the Board of Directors of the UnitePresident-elect Bill Clinton appointed Cole to his transition team for education, labor, the arts, and humanities in 1992. He also considered her for the cabinet post of Secretary of Education.

But when The Jewish Daily Forward reported that she had been a member of the national committee of the Venceremos Brigades, which the Federal Bureau of Investigation had tied to Cuban intelligence forces, Clinton did not advance her nomination. Research more about American Black Woman Educators and share with your babies. Make it a champion day!