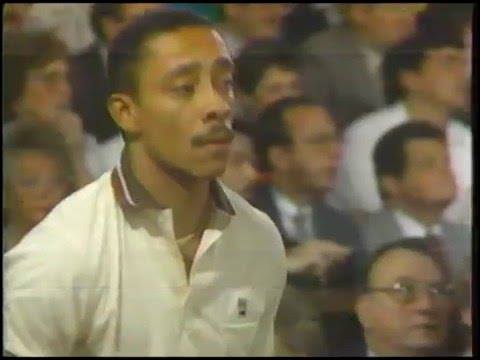 GM – FBF – Today’s story most people would not know the answer to if asked who as a black person won a PBA (Professional Bowlers Association) contest. Enjoy this story!

George Branham III is best known as the first African American to win a major Professional Bowlers Association (PBA) title and one of the very few men of color in professional bowling. Branham was born on November 21, 1962 in Detroit Michigan. His father, George Branham Jr., was an avid bowler who began teaching his son the sport in 1968.

In 1977 Branham’s family moved to San Fernando Valley, California where he attended Polytechnic High School. Although a multisport high school athlete, Branham determined that bowling would be his major sport. After high school Branham chose to hone his bowling skills through working in bowling alleys and playing in bowling leagues. In 1983 he won Southern California’s Junior Bowler of the Year and two years later he turned pro at the age of 23.

Branham professional bowling career got off to a quick start as he achieved eight consecutive tournament wins between 1985 and 1987 including the Brunswick Memorial World Open in 1986 where he became the first African American to win a major PBA event.

His career stalled until 1993 when he moved to Indianapolis and soon afterwards won the Baltimore Open. This win qualified Branham to participate in the Tournament of Champions, the PBA’s premiere event of the season.

Branham bowled an average of 238 in eight games and ultimately beat his opponent Parker Bohn III in the tournament’s final round. His victory earned him $65,000 and the title “King of the Hill.”

In 1996 Branham won the Cleveland Open which was his last major PBA victory. He continued to compete professionally until his retirement in 2003. Over his eighteen year career George Branham won five major PBA titles and scored 23,300 game points making him one of the most successful bowlers in modern history.

In 1993 Branham married Jacquelyn Phend. The couple had one daughter, Hadley. After his retirement, he remained devoted to bowling and opened a bowling alley in Indianapolis. Research more about blacks and PBA bowling and share with your babies. Make it a champion day!