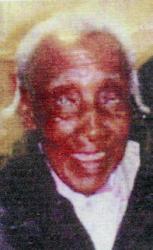 GM – FBF – Today’s story is of a black lady who outlived all but one of her children and was first married at 14 years old. She had seen the turn of 1900 and 2000 what a story she had to tell from all that she lived through. If you have an elder in your family or know a person that is 90 or more you need to be sitting down with them and hearing as much of their story that they remember for when they are gone that firsthand knowledge goes with them. Enjoy the story!

Remember – “Keep busy, work hard and don’t worry about how old you are.” – Pearl Gartrell

Pearl Gartrell was born in Tillsdale, Georgia on April 1, 1888 as one of the youngest of 15 children. She lived in Jacksonville, Florida for almost seventy years. She died on Sunday, November 23, 2008.

The Baptist lady gave birth to eight children and has outlived all but one of them. Yet, she refused to move to a facility for the elderly and until two years ago, proved that she did not need anyone to live with her. Actually, no one lived with her totally, but her relatives would alternate their time with her even though her great granddaughter, Doris King, spent much of her time with her trying to make sure things went as her great grandmother wanted them to go.

On Tuesday, November 11, Ms. Gartrell became ill and was taken to the hospital. She was placed in Hospice care on November 13 and died on November 23, 2008.

Ms. Gartrell did not have a copy of her birth certificate since she was not born in a hospital. Her birth was recorded in a family Bible. The Florida State ID card did not show the exact year of her birth because the computer would not activate the year, 1888. However, the Florida Department of Elder Affairs acknowledged that she was perhaps the oldest person living in?Florida until the time of her death.

Ms. Gartrell was very careful about her food and did not like to eat in restaurants because she could not be guaranteed that the workers washed their hands.

The lady did have one habit that she would not give up – her can of sweet snuff that she kept inside of her bottom lip. At 120 years of age, she still had most of her own teeth.

Ms. Gartrell was not a person with sickness but she did have some bouts of illness. In fact, the doctors thought she would surely die in 1991 when she contracted pneumonia at the age of 103 and refused to be hospitalized. She did not like to take medication so when such was prescribed, she would hide it under her mattress. Family members learned to watch her closely when medicine was prescribed for her, to make sure she followed orders.

Ms. Gartrell broke her hip and cracked her pelvis in 1998. Once her surgery was completed and the pin in her hip had been installed, she insisted upon going home, and she did. Within months, she was walking again.

Pearl Gartrell raised her great granddaughter, Lolitha Hill and some of the other relatives. When she talked about her younger days, she talked of her mother, who was a midwife, and worked for the town’s white doctor, of their deep-cooking fireplace and the time her mother covered the faces of all of the children with black soot and had them to hide in the back of the fireplace when the KKK came. She also told of the one-room school house that was attached to the Baptist church in Tignall, Georgia, near Athens, Georgia.

Pearl Gartrell married at the age of 14 but says she cannot remember her husband’s name. This memory loss may stem from the fact that her father, brother and husband were killed in her small Georgia town. What she also remembers of her younger days was when she was forced to be submissive and gave birth to two children by a white man in that town. But, she did not harbor hate, even though she was still very shy when it came to white people.

Ms. Gartrell was filled with wisdom and love. She kept strong belief in God and even though she had cataracts, she always wanted the paper, and always wanted The Florida Star, from its first days.

Pearl Gartrell not only raised her children, she helped with the others that came along and remained a God fearing woman. Of her eight children, one died at birth, three died of heart attacks, two had cancer, one son was murdered and found in the St. Johns River and Tom Gartrell still lives in Jacksonville in a nursing facility.

Mrs. King and Mrs. Hill said their great grandmother was the foundation of their family, all the days of her life, and they are eternally grateful. She will truly be missed. Research more about people who live to be over 100 years old and share with your babies. Make it a champion day!