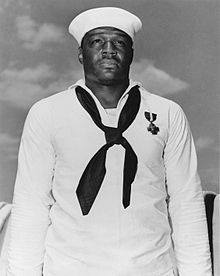 GM – FBF – Today’s story is about a man who gave his last ounce of courage for the people of black American’s and the
whole of the nation. Many stories about this man’s courage comes out now but during this black man’s time in the Navy during the boming, for his action he a be looked at as a hero and not just a cook, enjoy!

Remember – “”This marks the first time in this conflict that such high tribute has been made in the Pacific Fleet to a member of his race and I’m sure that the future will see others similarly honored for brave acts. – Dorie Miller

Today in our History – November 24, Dorie Miller dies. He was one of hero of WWII.

Dorie Miller (1919-1943), Hero of World War II
• Serving in a noncombat role in the Navy, Dorie Miller responded heroically when the battleship West Virginia was attacked at Pearl Harbor.

• Because the Navy was segregated, African Americans were not given combat roles or weaponry training, so Miller’s adept ability to shoot down enemy planes was all the more remarkable

• First African American awarded the U.S. Navy Cross
Doris Miller, known as “Dorie,” was born in Waco, Texas, in 1919. He was one of four sons. After high school, he worked on his father’s farm until 1938 when he enlisted in the Navy as mess attendant (kitchen worker) to earn money for his family. At that time the Navy was segregated so combat positions were not open to African-Americans.

On December 7, 1941, Dorie arose at 6 a.m. to begin work. When the Japanese attack occurred, he immediately reported to his assigned battle station. Miller was a former football player and a Navy boxing champ so his job was to carry any of the injured to safer quarters; this included the mortally wounded ship’s captain.
Miller then returned to deck and saw that the Japanese planes were still dive-bombing the U.S. Naval Fleet. He picked up a 50-caliber Browning antiaircraft machine gun on which he had never been trained and managed to shoot down three to four enemy aircraft. (In the chaos of the attack, reports varied, and not even Miller was sure how many he hit.) He fired until he ran out of ammunition; by then the men were being ordered to abandon ship. The West Virginia had been severely damaged and was slowly sinking to the harbor bottom.

On April 1, 1942 Miller was commended by the Secretary of the Navy, Frank Knox, and on May 27, 1942 he received the Navy Cross for his extraordinary courage in battle. His rank was raised to Mess Attendant First Class on June 1, 1942.
As happened with other war heroes, Dorie Miller was then sent on a tour in the States to raise money for war bonds, but Miller he was soon called back (spring ’43) to serve on the new escort carrier the USS Liscome Bay. The ship was operating in the Pacific near the Gilbert Islands.

At 5:10 a.m. on November 24, the ship was hit by a single torpedo fired from a Japanese submarine. The torpedo detonated the bomb magazine on the carrier; the bombs exploded, and the ship sank within minutes. Miller was initially listed as missing; by November 1944 he status was changed to “presumed dead.” Only 272 men survived the attack.

Today there is a Dorie Miller park in Hawaii and a good number of schools and buildings throughout the U.S. are named in his honor. He was also one of four Naval heroes featured on U.S. postal stamps in 2010.

However, many officers and men in the Navy felt that for his actions on the West Virginia at Pearl Harbor, Miller deserved more—that he should have been awarded the Medal of Honor.
Following the anniversary of the bombing of Pearl Harbor, I heard from many people who would like to show their support for Dorie Miller being given the Congressional Medal of Honor posthumously. Research more about this great American hero. Share with your babies and make it a champion day!