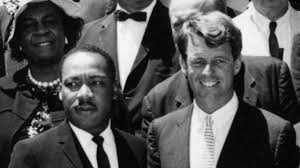 GM – FBF – “An organization which claims to be working for the needs of a community – as SNCC does – must work to provide that community with a position of strength from which to make its voice heard. This is the significance of black power beyond the slogan”. – Stokely Carmichael

Remember – A final SNCC legacy is the destruction of the psychological shackles which had kept black southerners in physical and mental peonage; SNCC helped break those chains forever. It demonstrated that ordinary women and men, young and old, could perform extraordinary tasks. – Julian Bond

Today in our History – April 15,1960 – The Student Nonviolent Coordinating Committee (SNCC, often pronounced /snɪk/ SNIK) was one of the major Civil Rights Movement organizations of the 1960s. It emerged from the first wave of student sit-ins and formed at an April 1960 meeting organized by Ella Baker at Shaw University. After its involvement in the Voter Education Project, SNCC grew into a large organization with many supporters in the North who helped raise funds to support its work in the South, allowing full-time organizers to have a small salary. Many unpaid grassroots organizers and activists also worked with SNCC on projects in the Deep South, often becoming targets of racial violence and police brutality. SNCC played a seminal role in the freedom rides, the 1963 March on Washington, Mississippi Freedom Summer, the Selma campaigns, the March Against Fear and other historic events. SNCC’s major contribution was in its field work, organizing voter registration, freedom schools, and direct action all over the country, but especially in Georgia, Alabama, and Mississippi.

In the later 1960s, inspired by fiery leaders such as Stokely Carmichael, SNCC focused on black power, and draft resistance to the Vietnam War. As early as 1965, executive secretary James Forman said he “did not know how much longer we can stay nonviolent” and in 1969, SNCC officially changed its name to the Student National Coordinating Committee to reflect the broadening of its strategy. It passed out of existence in the 1970s following heavy infiltration and suppression by the Federal Bureau of Investigation (FBI), spearheaded as part of COINTELPRO operations during the 1960s and 70s led by J. Edgar Hoover. Reserach more about SNCC and the begining of “The Black Panther Party” and share with your babies. Make it a champion day!