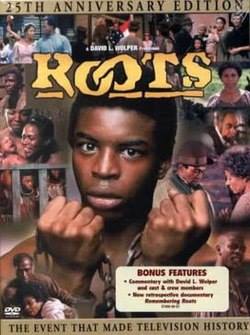 GM – FBF – Knowledge is power. Information is liberating. Education is the premise of progress, in every society, in every family.

Remember – “Roots is not just a saga of my family. It is the symbolic saga of a people.” – Alex Haley

Today in our History – January 23, 1977 – Roots is an American television miniseries based on Alex Haley’s 1976 novel Roots: The Saga of an American Family. The series first aired on ABC-TV in January 1977. Roots received 37 Primetime Emmy Award nominations and won nine. It also won a Golden Globe and a Peabody Award. It received unprecedented Nielsen ratings for the finale, which still holds a record as the third highest rated episode for any type of television series, and the second most watched overall series finale in U.S. television history. It was produced on a budget of $6.6 million. The series introduced LeVar Burton in the role of Kunta Kinte.

In 2016, a remake of the original miniseries, with the same name, was commissioned by the History Channel and screened by the channel on Memorial Day 2015. Reserach more about YOUR FAMILY because your babies need to know from where they come from. Make it a champion day!