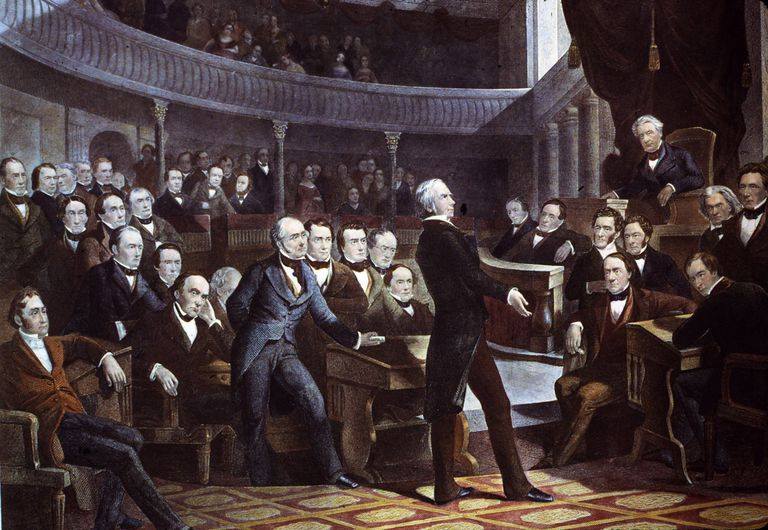 Remember – “If we do not compromise, the union will fail to exssist. By issuieing the compromise hopefully we acn avoid a great war of brother againist brother” – Henry Clay (W) KY.

Today in our History – January 29,1850 – The Compromise of 1850 was a series of five bills intended to stave off sectional strife that passed during Millard Fillmore’s presidency. With the Treaty of Guadalupe Hidalgo at the end of the Mexican-American War, all the Mexican-owned territory between California and Texas was given to the United States. This included parts of New Mexico and Arizona. In addition, portions of Wyoming, Utah, Nevada, and Colorado were ceded to the US.

The question that arose was what to do with slavery in these territories. Should it be allowed or forbidden? The issue was extremely important to both free and slave states because of the balance of power in terms of voting blocs in the US Senate and House of Representatives.

Henry Clay was a Whig Senator from Kentucky. He was nicknamed “The Great Compromiser” due to his efforts at helping bring these bills to fruition along with previous bills such as the Missouri Compromise of 1820 and the Compromise Tariff of 1833. He personally owned slaves which he would later free in his will. However, his motivation in passing these compromises, especially the 1850 compromise, was to avoid Civil War.

Sectional strife was becoming more and more confrontational. With the addition of new territories and the question of whether they would be free or slave territories, the need for a compromise was the only thing that at that time would have averted outright violence.

Realizing this, Clay enlisted the help of Democratic Illinois Senator, Stephen Douglas who would eight years later be involved in a series of debates with Republican opponent Abraham Lincoln.

Clay, backed by Douglas, proposed five resolutions on January 29, 1850 which he hoped would bridge the gap between Southern and Northern interests.

In April of that year, a Committee of Thirteen was created to consider the resolutions. On May 8th, the committee led by Henry Clay, proposed the five resolutions combined into an omnibus bill. The bill did not receive unanimous support. Opponents on both sides were not happy with the compromises including southerner John C. Calhoun and northerner William H. Seward. However, Daniel Webster put his considerable weight and verbal talents behind the bill. Nonetheless, the combined bill failed to win support in the Senate. Thus, the supporters decided to separate the omnibus bill back into five individual bills. These were eventually passed and signed into law by President Fillmore.

The Five Bills of the Compromise of 1850

The goal of the Compromise bills was to deal with the spread of slavery to territories in order to keep northern and southern interests in balance. The five bills included in the Compromises put the following into law:

California was entered as a free state.
New Mexico and Utah were each allowed to use popular sovereignty to decide the issue of slavery. In other words, the people would pick whether the states would be free or slave.
The Republic of Texas gave up lands that it claimed in present day New Mexico and received $10 million to pay its debt to Mexico.
The slave trade was abolished in the District of Columbia.
The Fugitive Slave Act made any federal official who did not arrest a runaway slave liable to pay a fine. This was the most controversial part of the Compromise of 1850 and caused many abolitionists to increase their efforts against slavery.
The Compromise of 1850 was key in delaying the start of the Civil War until 1861. It temporarily lessened the rhetoric between northern and southern interests, thereby delaying secession for 11 years. Clay died of tuberculosis in 1852. One wonders what might have happened if he had still been alive in 1861. Research more about this Compromise and tell your baby. Make it a champion day!