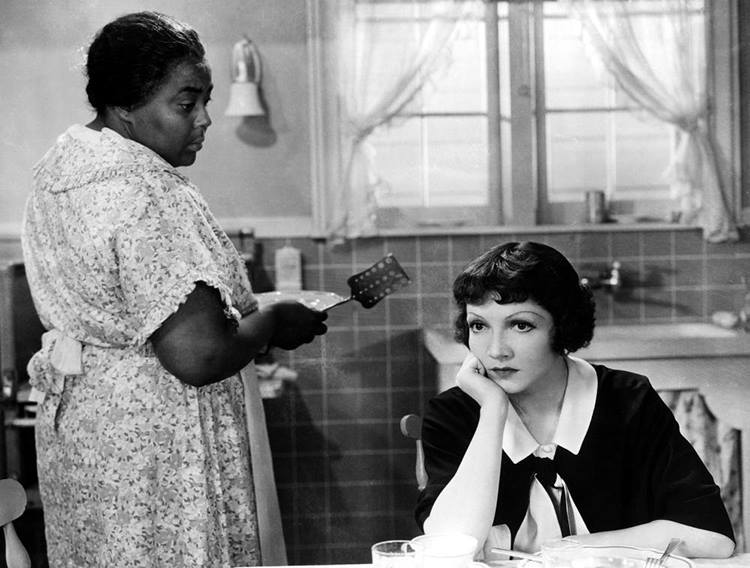 Remember – “the third Negro woman in this country to [ever] have my face on the big screen,” – Louise Beavers

Today in our History – March 9, 1902 – A great black actress was born who will be the 3rd only black to be on the big screen and on Television.

1930s and 1940s film actress Louise Beavers was merely one of a dominant gallery of plus-sized and plus-talented African-American character actresses forced to endure blatant, discouraging and demeaning stereotypes during Depression-era and WWII Hollywood. It wasn’t until Louise’s triumphant role in Fannie Hurst’s classic soaper Imitation of Life (1934) that a film of major significance offered a black role of meaning, substance and humanity. Despite the fact that Louise was playing yet another of her endless servile roles as housekeeper Delilah who works for single white mother Claudette Colbert, this time around her character was three-dimensional and not merely a source of servitude and/or or comic relief. She had her own dramatic story and brilliantly handled the heartbreaking co-plot of an appeasing single parent whose light-skinned daughter (played by Fredi Washington) went to cruel and desperate lengths to pass for white. While Louise certainly championed in the role and managed to steal the lion’s share of reviews right from under the film’s superstar, the movie triggered major controversy and just as many complaints as compliments from both black and white viewers. This certainly did not help what could have been a major, positive shift in black filmmaking. Instead, for the next two or more decades Louise was again forced to retreat into secondary status with precious few opportunities to shine.

Ms. Beavers was born in Cincinnati, Ohio, on March 9, 1902 and moved with her family to the Los Angeles area at age 11. A student at Pasadena High School and a choir member at her local church, her mother, a voice teacher, trained Louise for the concert stage but instead the young girl joined an all-female minstrel company called “Lady Minstrels” and even hooked up for a time on the vaudeville circuit. A nursing career once entertained was quickly aborted in favor of acting. Her first break of sorts was earning a living as a personal maid and assistant to Paramount star Leatrice Joy (and later actress Lilyan Tashman). By 1924 she was performing as an extra or walk-on in between her chores. A talent agent spotted her and gave her a more noticeable role in Uncle Tom’s Cabin(1927). She went on to gain even more visibility, but was invariably stuck in the background cooking or cleaning after the leads. Despite this her beaming smile and good nature paid off.
Following scene-grabbing maid roles to such stars as Mary Pickford in Coquette (1929) Linda Watkins in Good Sport (1931), Mae West in She Done Him Wrong (1933), Constance Bennett in What Price Hollywood? (1932) and Jean Harlow in Bombshell(1933), Louise received the role of her career. Her poignant storyline and final death scene deserved an Oscar nomination and many insiders took her snub as deliberate and prejudicial. Five years later her compatriot (and close friend) Hattie McDaniel would become the first black actor to not only earn an Oscar nomination but capture the coveted trophy as well for her subordinate role in Gone with the Wind (1939).

Despite their individual triumphs, both ladies continued to trudge through more of the same, albeit steadily. Occasionally Louise was rewarded with such Hollywood “A” treats as Made for Each Other (1939) with Carole Lombard, Holiday Inn (1942) starring Bing Crosby, and especially Mr. Blandings Builds His Dream House (1948) with Cary Grant and Myrna Loy. In The Jackie Robinson Story (1950), she offered lovely moments as the baseball star’s mother.

Although film offers dried up in the 1950s, Louise managed to transfer her talents to the new TV medium, and was one of a number of character actresses hired to play the wise-cracking, problem-solving maid Beulah (1950) during its run. “Beulah” was one of the first sitcoms to star a black actor. She also had a recurring role in Disney’s “The Swamp Fox”. In 1957, she made her professional stage debut in San Francisco with the short-lived play “Praise House” as a caregiver who extols the Bible through song. Her last few films, which included The Goddess (1958), All the Fine Young Cannibals (1960) and the Bob Hopecomedy The Facts of Life (1960) were typical stereotypes and unmemorable.

A long time bachelor lady who finally married in the 1950s, the short and stout actress was plagued by health issues in later years, her obesity and diabetes in particular. She lost her fight on October 26, 1962, at age 60 following a heart attack. In 1976 she was posthumously inducted into the Black Filmmakers Hall of Fame. Research more about this great American actress or watch the orgional “Imatation of Life” (1934). Make it a champion day!