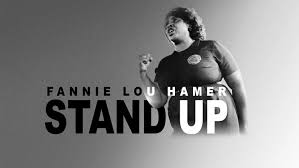 GM – FBF – “You can pray until you faint, but unless you get up and try to do something, God is not going to put it in your lap” – Fannie Lou Hamer

Fannie Lou Hamer (1917-1977) was a civil rights activist whose passionate depiction of her own suffering in a racist society helped focus attention on the plight of African-Americans throughout the South. In 1964, working with the Student Non-Violent Coordinating Committee (SNCC), Hamer helped organize the 1964 Freedom Summer African-American voter registration drive in her native Mississippi. At the Democratic National Convention later that year, she was part of the Mississippi Freedom Democratic Party, an integrated group of activists who openly challenged the legality of Mississippi’s all-white, segregated delegation.
Born Fannie Lou Townsend on October 6, 1917, in Montgomery County, Mississippi. The daughter of sharecroppers, Hamer began working the fields at an early age. Her family struggled financially, and often went hungry.
Married to Perry “Pap” Hamer in 1944, Fannie Lou continued to work hard just to get by. In the summer of 1962, however, she made a life-changing decision to attend a protest meeting. She met civil rights activists there who were there to encourage African Americans to register to vote. Hamer became active in helping with the voter registration efforts.
Hamer dedicated her life to the fight for civil rights, working for the Student Nonviolent Coordinating Committee (SNCC). This organization was comprised mostly of African American students who engaged in acts of civil disobedience to fight racial segregation and injustice in the South. These acts often were met with violent responses by angry whites. During the course of her activist career, Hamer was threatened, arrested, beaten, and shot at. But none of these things ever deterred her from her work.In 1964, Hamer helped found the Mississippi Freedom Democratic Party, which was established in opposition to her state’s all-white delegation to that year’s Democratic convention.
She brought the civil rights struggle in Mississippi to the attention of the entire nation during a televised session at the convention. The next year, Hamer ran for Congress in Mississippi, but she was unsuccessful in her bid.Along with her political activism, Hamer worked to help the poor and families in need in her Mississippi community.
She also set up organizations to increase business opportunities for minorities and to provide childcare and other family services. Hamer died of cancer on March 14, 1977, in Mound Bayou, Mississippi.