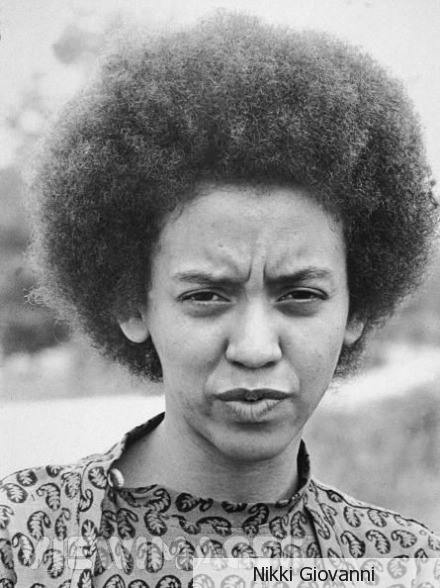 GM – FBF – “Mistakes are a fact of life. It is the response to the error that counts.” – Nikki Giovanni

Remember – “When you are skinning your customers, you should leave some skin on to grow again so that you can skin them again.” – Nikki Giovanni

On June 7, 1943, Yolanda Cornelia “Nikki” Giovanni was born in Knoxville, Tennessee and raised in Cincinnati, Ohio. In 1960, she entered Fisk University in Nashville, Tennessee, where she worked with the school’s Writer’s Workshop and edited the literary magazine. After receiving her Bachelor of Arts degree in 1967, she organized the Black Arts Festival in Cincinnati before entering graduate school at the University of Pennsylvania and Columbia University.

A lung cancer survivor, Giovanni has also contributed an introduction to the anthology Breaking the Silence: Inspirational Stories of Black Cancer Survivors (Hilton Publishing, 2005). Her honors include the Reverend Martin Luther King Jr. Award for Dedication and Commitment to Service in 2009, three NAACP Image Awards for Literature in 1998, the Langston Hughes award for Distinguished Contributions to Arts and Letters in 1996, as well as more than twenty honorary degrees from national colleges and universities. She has been given keys to more than a dozen cities, including New York, Los Angeles, Dallas, Miami, and New Orleans. Several magazines have named Giovanni Woman of the Year, including Essence, Mademoiselle, Ebony, and Ladies Home Journal. She was the first recipient of the Rosa Parks Woman of Courage Award. She has served as poetry judge for the National Book Awards and was a finalist for a Grammy Award in the category of Spoken Word. She is currently Professor of English and Gloria D. Smith Professor of Black Studies at Virginia Tech, where she has taught since 1987.

Seung-Hui Cho, the mass murderer who killed 32 people in the April 16, 2007 Virginia Tech shooting, was a student in one of Giovanni’s poetry classes. Describing him as “mean” and “menacing”, she approached the department chair to have Cho taken out of her class, and said she was willing to resign rather than continue teaching him. She stated that, upon hearing of the shooting, she immediately suspected that Cho might be the shooter.
Giovanni was asked by Virginia Tech president Charles Steger to give a convocation speech at the April 17 memorial service for the shooting victims (she was asked by Steger at 5pm on the day of the shootings, giving her less than 24 hours to prepare the speech). She expressed that she usually feels very comfortable delivering speeches, but worried that her emotion would get the best of her. On April 17, 2007, at the Virginia Tech Convocation commemorating the April 16 Virginia Tech massacre, Giovanni closed the ceremony with a chant poem, intoning:
“We know we did nothing to deserve it. But neither does a child in Africa dying of AIDS. Neither do the invisible children walking the night awake to avoid being captured by a rogue army. Neither does the baby elephant watching his community being devastated for ivory. Neither does the Mexican child looking for fresh water….We are Virginia Tech…. We will prevail.”