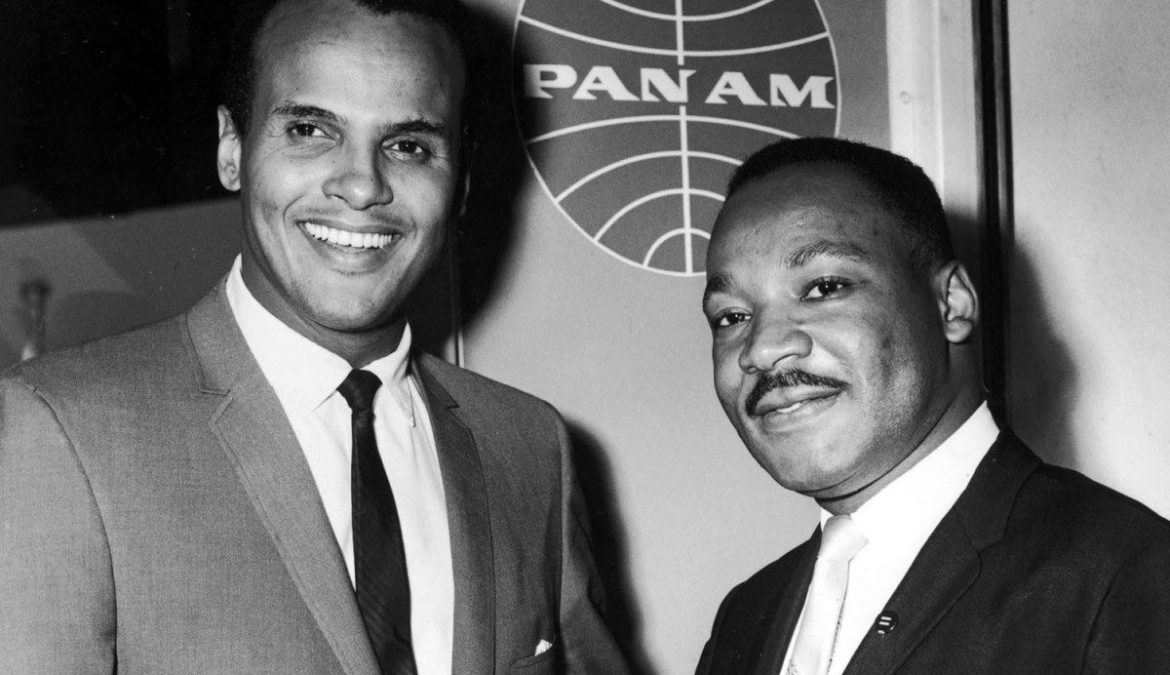 GM – FBF- “In the gun game, we are the most hunted. The river of blood that washes the streets of our nation flows mostly from the bodies of our black children,” – Harry Belafonte

Remember – “When I was born, I was colored. I soon became a Negro. Not long after that I was black. Most recently I was African-American. It seems we’re on a roll here. But I am still first and foremost in search of freedom.” – Harry Belafonte

Today in our History – March 1, 1927 – Harry Belafonte, byname of Harold George Belafonte, Jr.,born in New York City, New York, American singer, actor, producer, and activist who was a key figure in the folk music scene of the 1950s, especially known for popularizing the Caribbean folk songs known as calypsos. He was also involved in various social causes, notably the civil rights movement.

Belafonte was born in Harlem to emigrants from the Caribbean islands of Martinique and Jamaica. When his mother returned to Jamaica in 1935, he joined her, living there until 1940. He left high school to serve in the U.S. Navy in the mid-1940s. After returning to New York City, Belafonte studied drama at Erwin Piscator’s Dramatic Workshop, where a singing role led to nightclub engagements and a recording contract as a pop singer.

In 1950 Belafonte became a folk singer, learning songs at the Library of Congress’s American folk song archives. He sang Caribbean folk songs as well, in nightclubs and theatres; his handsome appearance added to his appeal as a frequent performer on television variety programs. With hit recordings such as “Day-O (Banana Boat Song)” and “Jamaica Farewell,” he initiated a fad for calypso music and became known as the King of Calypso. In the mid-1950s his Harry Belafonte and Mark Twain and Other Folk Favorites were the first of his series of hit folk song albums. During this time he made his Broadway debut, appearing in the musical John Murray Anderson’s Almanac (1953–54); for his performance, he won a Tony Award for supporting actor. Later in the decade he starred on the stage in 3 for Tonight and Belafonte at the Palace.

In 1953 Belafonte made his film debut in Bright Road, playing a school principal. The following year he was the male lead (but did not sing) in the musical Carmen Jones; his costar was Dorothy Dandridge. The film was a huge success, and it led to a starring role in the film Island in the Sun (1957), which also featured Dandridge. He produced the film Odds Against Tomorrow (1959), in which he starred. He also starred in the TV special Tonight with Belafonte (1959), a revue of African American music; Belafonte won an Emmy Award for his work on the show.

Belafonte then took a break from acting to focus on other interests. In the 1960s he became the first African American television producer, and over the course of his career he served in that capacity on several productions. During this time Belafonte continued to record, and his notable albums include Swing Dat Hammer (1960), for which he received a Grammy Award for best folk performance. His collaborations with South African singer Miriam Makeba and Greek singer Nana Mouskouri helped introduce them to American audiences, and An Evening with Belafonte/Makeba (1965) garnered a Grammy for best folk recording. In 1970 he returned to the big screen with the drama The Angel Levine. Later film credits include Buck and the Preacher (1972), Uptown Saturday Night (1974), The Player (1992), Kansas City (1996), and Bobby (2006).

Throughout his career, Belafonte was involved in various causes. He was a supporter of the civil rights movement and a close friend of Martin Luther King, Jr. Belafonte was active in African humanitarian efforts, notably appearing on the charity song “We Are the World” (1985). In 1987 he became a UNICEF goodwill ambassador. He received the Jean Hersholt Humanitarian Award from the Academy of Motion Picture Arts and Sciences in 2014. I will not be able to respond to all posts today as I will be speaking at Georgia Gwinnett College in Lawerenceville, GA. as I finish my Black History Month Speaking tour. Make it a champion day!