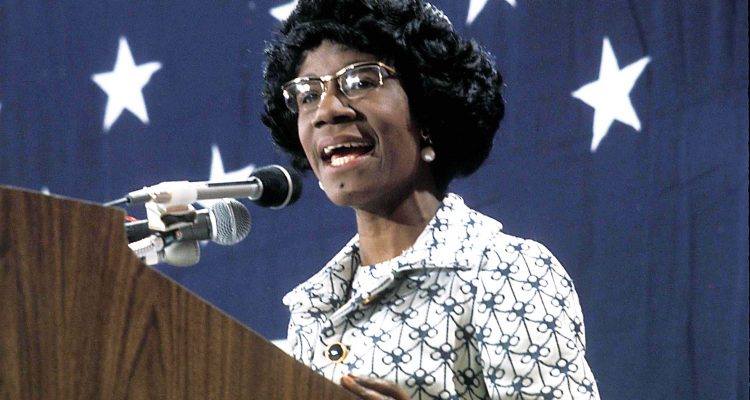 Shirley Anita Chisholm (née St. Hill; November 30, 1924 – January 1, 2005) was an American politician, educator, and author. In 1968, she became the first black woman elected to the United States Congress, and she represented New York’s 12th Congressional District for seven terms from 1969 to 1983. In 1972, she became the first black candidate for a major party’s nomination for President of the United States, and the first woman to run for the Democratic Party’s presidential nomination.

In 2015, Chisholm was posthumously awarded the Presidential Medal of Freedom. Shirley Anita St. Hill was born on November 30, 1924, in Brooklyn, New York, to immigrant parents from the Caribbean region. She had three younger sisters, two born within three years after St. Hill, one later. Their father, Charles Christopher St. Hill, was born in British Guiana, lived in Barbados for a while, and then arrived in the United States via Antilla, Cuba, on April 10, 1923, aboard the S.S. Munamar in New York City. Their mother, Ruby Seale, was born in Christ Church, Barbados, and arrived in New York City aboard the S.S. Pocone on March 8, 1921. Beginning in 1939, St. Hill attended Girls’ High School in the Bedford–Stuyvesant neighborhood of Brooklyn, a highly regarded, integrated school that attracted girls from throughout Brooklyn. St. Hill earned her Bachelor of Arts from Brooklyn College in 1946, where she won prizes for her debating skills. She was a member of Delta Sigma Theta sorority.

St. Hill met Conrad O. Chisholm in the late 1940s. He had come to the U.S. from Jamaica in 1946 and later became a private investigator who specialized in negligence-based lawsuits. They married in 1949 in a large West Indian-style wedding.

Chisholm taught in a nursery school while furthering her education, earning her MA in elementary education from Teachers College at Columbia University in 1952.

Chisholm began exploring her candidacy in July 1971, and formally announced her presidential bid on January 25, 1972, in a Baptist church in her district in Brooklyn. There she called for a “bloodless revolution” at the forthcoming Democratic nomination convention. Chisholm became the first black major-party candidate to run for President of the United States, in the 1972 U.S. presidential election, making her also the first woman ever to run for the Democratic Party’s presidential nomination (U.S. Senator Margaret Chase Smith had previously run for the Republican presidential nomination in 1964). By the time of the national convention, the loyalists were seated following a credentials challenge, and their delegates were characterized as mostly supporting McGovern, with some support for Humphrey. During the convention, some McGovern delegates became angry about what they saw as statements from McGovern that backed away from his commitment to end U.S. involvement in Southeast Asia, and cast protest votes for Chisholm as a result. During the actual balloting, Mississippi went in the first half of the roll call, and cast 12 of its 25 votes for Chisholm, with McGovern coming next with 10 votes.

During the campaign the German filmmaker Peter Lilienthal shot the documentary film Shirley Chisholm for President for German Television channel ZDF.
After leaving Congress, Chisholm made her home in suburban Williamsville, New York. She resumed her career in education, being named to the Purington Chair at the all-women Mount Holyoke College in Massachusetts. As such she was not a member of any particular department, but would be able to teach classes in a variety of areas; those previously holding the position included W. H. Auden, Bertrand Russell, and Arna Bontemps.

At Mount Holyoke, she taught politics and sociology from 1983 to 1987. She focused on undergraduate courses that covered politics as it involved women and race. Dean of faculty Joseph Ellis later said that Chisholm “contributed to the vitality of the College and gave the College a presence.” In 1985 she was a visiting scholar at Spelman College.

During those years, she continued to give speeches at colleges, by her own count visiting over 150 campuses since becoming nationally known. She told students to avoid polarization and intolerance: “If you don’t accept others who are different, it means nothing that you’ve learned calculus.” Continuing to be involved politically, she traveled to visit different minority groups and urging them to become a strong force at the local level. In 1984 and 1988, she campaigned for Jesse Jackson for the presidential elections. In 1990, Chisholm, along with 15 other black women and men, formed the African-American Women for Reproductive Freedom.

Chisholm retired to Florida in 1991. In 1993, President Bill Clinton nominated her to be United States Ambassador to Jamaica, but she could not serve due to poor health and the nomination was withdrawn. In the same year she was inducted into the National Women’s Hall of Fame.

Chisholm died on January 1, 2005, in Ormond Beach near Daytona Beach, after suffering several strokes. She is buried in the Oakwood Mausoleum at Forest Lawn Cemetery in Buffalo, where the legend inscribed on her vault reads: “Unbought and Unbossed”. Research more about this great American and share with your babies. Make it a champion day!