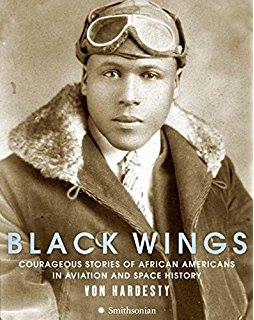 GM – FBF – The “Great War” , World War I America had no black flying airmen but in World War II we will hear of the Tuskegee Airmen. Read the story of an American who flew a plane long before America would let blacks fly. Enjoy!

Eugene Jacques Bullard (1895 – 1961) was born October 9, 1895, in Columbus, GA as the seventh out of ten total children born to William Octave Bullard and Josephine “Yokalee” Thomas. Eugene’s father was originally from Martinique but William arrived in the United States of America as a slave when his owners settled here after fleeing Haiti during the French Revolution. His mother, Josephine, was a Creek Native American. Bullard is considered to be the first African-American military pilot to fly in combat, and the only African-American pilot in World War I. Ironically, he never flew for the United States.

In 1906, at the age of 11, Bullard ran away craving adventure. He was also traumatized by his dad’s near lynching experience by a mob of drunken white men who had found out that Mr. Bullard hit a white man in self-defense. Young Eugene took off shortly after this incident and for the next six years, he wandered the South in search of freedom.

In 1912 he stowed away on the Marta Russ, a German freighter bound for Hamburg, and ended up in Aberdeen, Scotland. From there he made his way to London, where he worked as a boxer and slapstick performer in an African American entertainment troupe. In 1913, Bullard went to France for a boxing match. Settling in Paris, he became so comfortable with French customs that he decided to make a home there. He later wrote, “… it seemed to me that French democracy influenced the minds of both black and white Americans there and helped us all act like brothers.” In early October 1914, at the age of 19, Bullard joined the French Foreign Legion, eager to fight in World War I against the Central Powers. About a year later he was transferred to the French army’s 170th Infantry, known as the “Swallows of Death,” after the decimation of his Foreign Legion unit. Bullard saw action on the western front, first as a foot soldier, then as a machine gunner, surviving a number of near death moments. Through the Battle of Champagne, Battle of the Somme, and the Battle of Verdun; Eugene lost almost all his teeth, survived a hole in his thigh from shrapnel and a bloody bombing at the village of Fleury. For his gallantry, the French government awarded Bullard the Croix de Guerre (Cross of War) in June 1916 at a ceremony Lyon.

Although fit with new dentures and recovered from his leg wound, Eugene was deemed no longer fit to be a foot soldier. Yet he was determined to get back into the action. After seven months of training, he became an aircraft gunner in the French air force’s Lafayette Flying Corps, an all-American volunteer outfit. Before long, Bullard, now a corporal, set his sights on the cockpit. Having mastered several maneuvers, Eugene earned his wings on May 16 1917, becoming the first black combat pilot twenty-four years before the first Tuskegee Airmen took flight.

By war’s end in November 1918, Bullard had flown on twenty missions and was credited with shooting down at least one enemy plane. Legend has it that he painted a bleeding heart on the fuselage of his airplane and below it wrote, “Tout le Sang qui coule est rouge!” (All blood runs red!). During his lifetime, Eugene Ballard was awarded fifteen French war medals. Including the Knight of the Légion d’honneur, Médaille Militaire, Croix de Guerre, Volunteer’s Cross (Croix du combattant volontaire), Wounded Insignia, World War I Commemorative Medal, World War I Victory Medal, Freedom Medal, and the World War II Commemorative Medal.

After being discharged from the Armed Forces Eugene Bullard became part owner of his own nightclub, Le Grand Duc at 52 rue Pigalle, in France. His club was one of the most popular and famous spots for singers and musicians at the time. Luminaries such as the Prince of Wales, Pablo Picasso, Ernest Hemingway, F. Scott Fitzgerald and England’s Prince of Wales were seen in his establishment. While working the nightclub scene he also became friends with Josephine Baker, Louis Armstrong, and Langston Hughes.

During the second World War Eugene Bullard agreed to serve France again as a spy. He was very successful at this endeavor because the Germans didn’t think that African Americans were capable of understanding German and Eugene spoke English, German and French. While serving in this capacity he occasionally worked with the famous French spy Cleopatra Terrier.

Despite being named a Knight of the Legion of Honor in New York City during a lavish ceremony, being embraced by President-General Charles de Gaulle of France in 1960 when he visited the USA and labeled a “True French Hero,” helping to relight the Eternal Flame of the Tomb of the Unknown French Soldier at the request of France, and being buried with full honors by the Federation of French War Officers, Eugene Bullard was never recognized in the United States for any of his achievements. It wasn’t until 1994 that the United States Air Force recognized him and posthumously commissioned him a Second Lieutenant.

Eugene Bullard married a French Countess and had one son (died of double pneumonia) and two daughters. He passed on October 12, 1961, from stomach cancer in New York City. He is currently interred in the French War Veterans’ section of Flushing Cemetery in the New York City borough of Queens. Research more about blacks in Aveation and share with your babies. Make it a champion day!