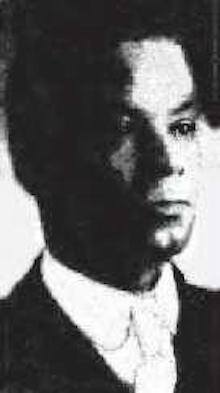 GM – FBF – A story about a black man and his reaction to unfair treatment of blacks in Southern California.

Remember – “We as a people and me as a black man, will not take this discrimination any more.” – Edward William Anderson

Today in our History – May 17, 1897 – Edward William Anderson and his wife Mary, could not get floor seats at the
famous Fisher Opera House in San Diego, CA.

Entrepreneur, political organizer, and civilian pioneer, Edward William Anderson was born the son of former slaves, Wyatt and Fannie Anderson, in Hopkinsville, Kentucky, September 26, 1871. He arrived in San Diego, California, in the mid-1890s with just $1.25 in his pocket but was confident in his ability to thrive as a business owner. His first successful venture was as owner, at age twenty-five, of IXL (I Excel) Laundry which grew to become the largest steam laundry in the region with thirty-five employees.

Anderson unwittingly involved himself in the struggle for equal rights for people of color in California when on May 17, 1897, he and his wife, Mary, arrived with tickets in hand to claim their seats for a performance of Around the World in Eighty Days at the city’s premier entertainment venue, the elegant Fisher Opera House. Instead of being ushered to the choice seats near the orchestra, the theater manager, who redirected him to the balcony, said, “I do not allow colored people on that floor.” Anderson refused the balcony seats, accepted a refund of the tickets, and a week later filed a lawsuit for $299 in damages. Due mainly to a recently enacted provision of the state’s civil rights law, Anderson prevailed and was awarded $50. The judgment was reversed on appeal and further legal action by Anderson did not succeed; however, his challenge set legal precedent as the first racial discrimination court case of its kind in Southern California.

Over the next four decades, Anderson became the most prosperous black businessman in San Diego County. In 1910 he acquired one hundred and sixty acres along the California-Mexico border and quickly resold it at a 50 percent mark-up. Next, he bought his uncle’s grocery store and soon after launched Economy Waste Paper Company and the even more prosperous San Diego Rubbish & Garbage Company which held an exclusive seven-year city contract. After winning another garbage disposal contract with the nearby city of Coronado, Anderson used some of the gathered refuse to feed hogs on his adjacent Silver Strand Ranch where he owned a meat-packing operation and Anderson Meat Market which sold its own special sausage brand. His porkers won prizes at fairs throughout the state, earning him the nickname “Hog King of San Diego.” In 1943 Anderson launched Anderson Mortuary (later Anderson-Ragsdale Mortuary) which continues to serve the community.

Anderson’s social activism continued with his growing business success. He remained a central figure in the quest for equal rights, co-founding the San Diego branch of the NAACP in 1919 and serving three terms as its president between 1931 and 1943. He also assisted the branch in various official capacities and as a confidential advisor. A Prince Hall Mason, he also was president of the Negro Business League, the Independent Voters League, and the Douglass League as well as treasurer of the Negro Civic League and a member of the Elks and the San Diego Republican Central Committee.

Edward W. Anderson died August 11, 1953, in San Diego and buried in Mount Hope Cemetery. He was survived by his wife, Mary, and a sister, Rosa Little. I could not find many pictures of him or his wife. Research more about how blacks reacted to discrimination and share with your babies. Make it a champion day!