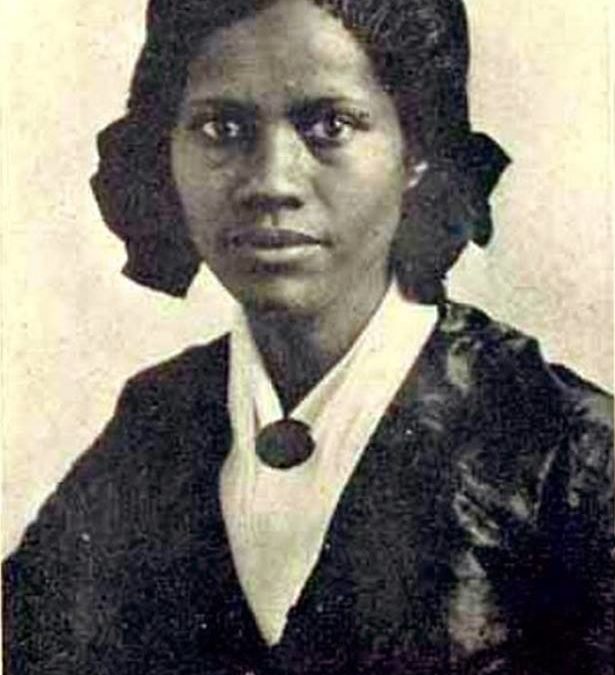 GM – FBF- Today, I give you the history of the woman who was called – ” The mother of woman’s activisim” Enjoy!

Remember – “Political life in our country has plowed in muddy channels, and needs the infusion of clearer and cleaner waters.” – Frances Ellen Watkins Harper

Today in our History – May 20,1851 – Worked with the Underground Railroad to help get escaped slaves to Canada.

Frances Ellen Watkins Harper (September 24, 1825-February 22, 1911), was an African-American writer, lecturer, and political activist, who promoted abolition, civil rights, women’s rights, and temperance. She helped found or held high office in several national progressive organizations. She is best remembered today for her poetry and fiction, which preached moral uplift and counseled the oppressed how to free themselves from their demoralized condition.
Frances was born in Baltimore, Maryland, to free parents whose names are unknown. After her mother died in 1828, Frances was raised by her aunt and uncle. Her uncle was the abolitionist William Watkins, father of William J. Watkins, who would become an associate of Frederick Douglass. She received her education at her uncle’s Academy for Negro Youth and absorbed many of his views on civil rights. The family attended the African Methodist Episcopal (AME) church.

Following the passage in 1850 of the Fugitive Slave Law, conditions for free blacks in the slave state of Maryland deteriorated and the Watkins family fled Baltimore. Frances Watkins moved on her own to Ohio, where she taught sewing at Union Seminary. She moved on to Pennsylvania in 1851. There, alongside William Still, Chairman of the Pennsylvania Abolition Society, she helped escaped slaves along the Underground Railroad on their way to Canada.

Watkins continued to write, and in 1854 her Poems on Miscellaneous Subjects attracted critical notice and became her biggest commercial success. In these poems she attacked not only racism but also the oppression of women. Most of the earnings from this and her other books went to help free the slaves. In 1854 she also began her lecturing career. She was much in demand on the anti-slavery circuit and she traveled extensively in the years before the Civil War.

John Brown, who had been principal at Union Seminary when Watkins had worked there,* led the unsuccessful uprising at Harper’s Ferry in 1859. Watkins gave emotional support and comfort to Mary Brown during her husband’s trial and execution. In a letter smuggled into John Brown’s prison cell, Watkins wrote, “In the name of the young girl sold from the warm clasp of a mother’s arms to the clutches of a libertine or profligate,—in the name of the slave mother, her heart rocked to and fro by the agony of her mournful separations,—I thank you, that you have been brave enough to reach out your hands to the crushed and blighted of my race.”

In 1859 Watkins’s tale “The Two Offers” appeared in the Anglo-African, the first short story to be published by an African-American. Although cast in fictional form, the piece is actually a sermon on the important life choices made by young people, women in particular. The tale relates the tragedy of a woman who mistakenly thinks romance and married love to be the only goal and center of her life. “Talk as you will of woman’s deep capacity for loving,” Watkins preached, “of the strength of her affectional nature. I do not deny it; but will the mere possession of any human love, fully satisfy all the demands of her whole being? . . . But woman—the true woman—if you would render her happy, it needs more than the mere development of her affectional nature. Her conscience should be enlightened, her faith in the true and right established, and scope given to her Heaven-endowed and God-given faculties.”

In 1860, Frances Watkins married Fenton Harper, a widower with three children, and moved to Ohio. Their daughter, Mary, was born in 1862. Fenton died in 1864. After the war was over, Frances Harper toured the South, speaking to large audiences, encouraging education for freed slaves, and aiding in reconstruction.

Harper first became acquainted with Unitarians before the war, due to their support of abolition and the Underground Railroad. Her friend Peter H. Clark, a noted abolitionist and educator in Ohio, had become a Unitarian in 1868. When Harper and her daughter settled in Philadelphia in 1870, she joined the First Unitarian Church.

With slavery a thing of the past, Harper turned her energy to women’s rights. She spoke up for the empowerment of women and worked with Susan B. Anthony and Elizabeth Cady Stanton to secure votes for women. Unlike Anthony and Stanton, Harper supported the Fourteenth Amendment, which, together with the Fifteenth, granted the vote to black men but not to women. Recognizing the ever-present danger of lynching, she reasoned that the African-American community needed an immediate political voice. With that would come the possibility of securing further legal and civil rights.

During the next few decades, Harper wrote a great deal and had her works published frequently. Because of her many magazine articles, she was called the mother of African-American journalism. At the same time she also wrote for periodicals with a mainly white circulation.

Long fascinated with the character of Moses, whose modern equivalents she sought in the women and men of her own era, Harper treated this theme in poetry, fiction, and oratory. Before the Civil War, in her 1859 speech, “Our Greatest Want,” she had challenged her fellow blacks: “Our greatest need is not gold or silver, talent or genius, but true men and true women. We have millions of our race in the prison house of slavery, but have not yet a single Moses in freedom.”

The poems in Harper’s Sketches of Southern Life, 1872, present the story of Reconstruction, as told by a wise and engaging elderly former slave, Aunt Chloe. Harper’s serialized novel, “Sowing and Reaping,” in the Christian Recorder, 1876-77, expanded on the theme of “The Two Offers.” In “Trial and Triumph,” 1888-89, the most autobiographical of her novels, Harper presented her program for progress through personal development, altruism, non-discrimination, and racial pride.

In 1873 Harper became Superintendent of the Colored Section of the Philadelphia and Pennsylvania Women’s Christian Temperance Union. In 1894 she helped found the National Association of Colored Women and served as its vice president, 1895-1911. Along with Ida B. Wells, Harper wrote and lectured against lynching. She was also a member of the Universal Peace Union.

Although busy as a writer and active in public life, Harper continued to engage personally in social concerns at the local level. She worked with a number of churches in the black community of north Philadelphia near her home, feeding the poor, preventing juvenile delinquency, and teaching Sunday School at the Mother Bethel African Methodist Episcopal (AME) church.

Both Unitarians and the AME church have claimed Harper as a member. She was reluctant to choose between the two. AME was the church she had been raised in. It was family and home to her, and she always remembered where she came from and what her people had been through. Her reasons for joining the Unitarian church, on the other hand, may have been partly political. Although she had had personal and professional contacts in both black and white communities ever since her first book of poems was published, many doors remained closed to her. In a society where color lines were clearly drawn, a Unitarian church provided a rare opportunity for the races to meet. The Unitarians she knew could help to advance the causes she supported in places she could never go.

Harper’s christology was Unitarian. Christ was not a distant God to her, but a role model for the kind of exalted existence that all human beings could attain. In Iola Leroy, 1892, her final and famous novel (which, until recently, was her only-remembered novel), she envisioned a Christ-like role for African-Americans, who, by transcending their suffering, had the opportunity to transform society.

Harper died on 22 February 1911, nine years before women gained the right to vote. Her funeral service was held at the Unitarian Church on Chestnut Street in Philadelphia. She was buried in Eden Cemetery, next to her daughter, who had died two years before.

Although an extremely popular writer during her lifetime, Harper was not acclaimed by literary critics. Following her death W.E.B. Du Bois, whose ideal of high style was Henry James, eulogized her with faint praise: “She was not a great singer, but she had some sense of song; she was not a great writer, but she wrote much worth reading.” Shortly after, Harper’s communicative and intentionally popular style was dismissed as sentimental hackwork by African-American male critics and her message held in suspicion because her mixed-race protagonists were not sufficiently black.

During the 20th century, as her reputation waned and the best of her poetry languished unread. Harper’s gravestone fell over and was covered by grass. In her celebrated poem, “Bury Me In a Free Land,” she wrote,

I ask no monument, proud and high,
To arrest the gaze of passers-by;
All that my yearning spirit craves,
Is bury me not in a land of slaves.

In recent decades, however, black women and feminists in general have resurrected Harper’s legacy. In 1992 African-American Unitarian Universalists honored her and commemorated the one-hundredth anniversary of Iola Leroy by installing a new headstone. In the excavation, the old headstone was uncovered, forgotten but still enduring. Harper’s call for full human development—black and white, male and female—also endures, as urgent and vital during these decades following the Civil Rights movement and Women’s Liberation as it was during Reconstruction and its aftermath. Make It A Champion Day!