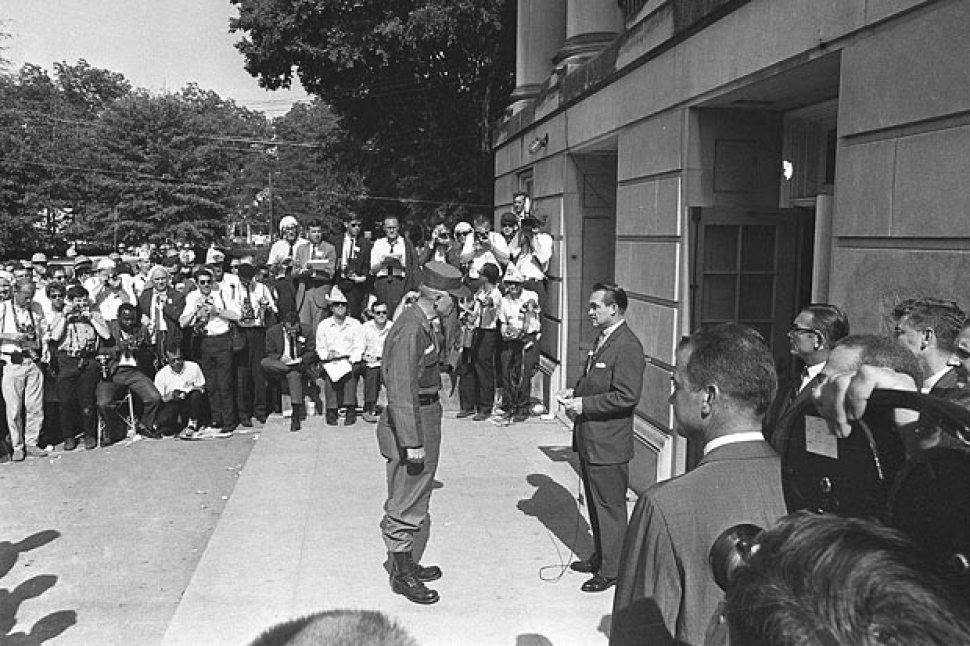 GM – FBF – Today I will take you back to when Eduction was a must. Now in your mind just remember that George Wallace Stood in a Doorway at the University of Alabama 55 Years Ago Today.

Today in our History – June 11, 1963 – George Wallace Stood in a Doorway at the University of Alabama 55 Years Ago Today

The staunch conservative demonstrated his loyalty to the cause on June 11, 1963, when black students Vivian Malone and James A. Hood showed up at the University of Alabama campus in Tuscaloosa to attend class. In what historians often refer to as the “Stand in the Schoolhouse Door,” the governor literally stood in the doorway as federal authorities tried to allow the students to enter.

When Wallace refused to budge, President John F. Kennedy called for 100 troops from the Alabama National Guard to assist federal officials. Wallace chose to step down rather than incite violence.

The summer of 1963 was a tense time in this nation’s history. The day after Wallace’s standoff, civil rights leader Medgar Evers was assassinated in Jackson, Miss. Violence also struck in Cambridge, Md., and Danville, Va., that June.
Kennedy spoke to a national audience hours after the Alabama showdown, outlining his plans for federal legislation to make way for further integration.

The landmark speech angered conservative Americans. Representative Charles C. Diggs, Jr. a Democrat from Michigan who would go on to serve as the first chair of the Congressional Black Caucus, said: “If the Negroes don’t get their demands, they will turn to other leadership that will produce an even greater crisis than this one.”

Sure enough, crisis after crisis plagued America over the next few years, culminating in 1968 with the assassinations of Martin Luther King, Jr., and Robert Kennedy, as well as mass rioting at the 1968 Democratic Convention in Chicago (although that had more to do with the Vietnam War than racial injustice).

Today, 55 years removed from Wallace’s protest, the University of Alabama’s student body is 13 percent African American, which is only slightly lower than the national average of 14 percent of college students, but is equal to the overall percentage of black people in the United States.

Race violence, however, erupted at other places in the nation. In the same week: A Negro leader was shot in the back and mortally wounded at Jackson, Miss. Race riots broke out at Danville, Va., and Cambridge, Md.

President Kennedy, on June 11, went on radio and television appealing to the nation to give Negroes equal rights. He called for new federal laws to deal with race problems. In Congress, a bitter battle began over the President’s legislative proposals.
On June 14. mass demonstrations spread to the nation’s capital. Several thousand Negroes—and several hundred white sympathizers—massed at the White House, then marched quietly through midtown Washington with signs protesting racial discrimination—both local and national.

The march ended at the Justice Department, where Attorney General Robert Kennedy congratulated the marchers on their peaceful demonstration and assured them the Federal Government is trying to speed integration and improve Negro job opportunities. Research more about unrest on our American and share with your babies. Make it a champion day!