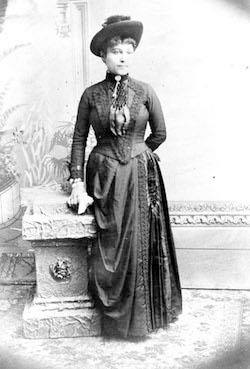 GM- FBF – Today I will examine one of the great American History Stories. The story you are about to read is part my own DNA. Although on my Father’s side of the family many people say that is part of my family tree. Amanda American Dickerson Toomer had a lot challanges in her life. Enjoy!

Remember – I had to go to all of the courts, just to keep the money my Father left me. – Amanda America Dickson

Heiress and socialite Amanda America Dickson Toomer was, in her time, the wealthiest African Aerican woman in Georgia, and one of the wealthiest women in the United States.

Born November 20, 1849, on the Dickson Plantation, near Sparta, Georgia (Hancock County), Amanda America was the product of her 12-year-old mother, an enslaved house servant, Julia Francis Lewis, and 40-year-old David Dickson, a well-known agricultural reformer of that era and one of the wealthiest planters in the area. In her youth, Amanda was taken into the Dickson family home and raised by her paternal grandmother where she was taught to read, write, and play the piano. According to Dickson family tradition, David Dickson eventually doted on his only daughter.

In 1866, 17-year-old Amanda married her white first cousin, Charles Eubanks, a recently returned Confederate Army veteran and together they had two children, Julian Henry and Charles Green. It was an unhappy marriage, and in 1870, Amanda left her husband, and returned to the Dickson Plantation, where she was legally given the surname of Dickson for herself and her sons. Eubanks died two years later.

Dickson left home briefly again between the years of 1876 and 1878, to attend the Normal School of Atlanta University. When her father David Dickson died in 1885, and his will was read, it was revealed that he left all of his property, over 15,000 acres of land in Hancock and Washington Counties as well as his personal possessions, and money, together estimated at slightly over $300,000, to his daughter Amanda Dickson and her two sons. Although the will specifically warned Dickson family members not to contest his wishes, 79 relatives filed a lawsuit to prevent Amanda Dickson from inheriting the property.

The Superior Court of Hancock County upheld her claim and the family appealed to the Georgia Supreme Court. That court ruled in 1887 that Amanda Dickson was legally entitled to the inheritance under the Fourteenth Amendment of the U.S. Constitution, which states that property rights are equal for blacks and whites, including the offspring of black and white citizens.

On July 15, 1886, before the Georgia Supreme Court ruling, pressure from other family members forced Dickson to leave the family plantation where she had spent most of her life. She moved to Augusta, Georgia before the town mandated residential segregation by race and purchased a large brick home at 484 Telfair Street, in the most prominent neighborhood in the city.

On July 14, 1892, Amanda married Nathan Toomer of Perry, Georgia. Born in 1839 in Chatham County, North Carolina, Toomer had been the slave of Richard Pilkinson of Chatham County, North Carolina but was later sold to John Toomer of Houston County, Georgia. When John Toomer died, he became the property of Colonel Henry Toomer, John’s brother.
Amanda and Nathan were married about a year when Amanda America Dickson Toomer died on June 11or 12 1893, in Augusta from neurasthenia, or nervous exhaustion, considered to be caused by an unbearably hot train ride home from a month’s stay in Baltimore, Maryland for her health.

She was only 43 years old. Amanda America Dickson Toomer was buried in her wedding dress, in a metallic coffin, which was lined in rose colored plush fabric. The funeral was held at Trinity Colored Methodist Church, and she is buried in Cedar Grove Cemetery, Richmond County, Georgia. Nathan Toomer later married Nina Pinchback. The couple had one son, the prominent Harlem (New York) Renaissance author Jean Toomer.

Dickson’s biography titled Woman of Color, Daughter of Privilege: Amanda America Dickson 1849-1893, Dickson defined herself as a “no nation” among both her black relatives and white relatives. When her father died in 1885, he left the bulk of his estate to Dickson (estimated at more than $300,000 plus land). White relatives contested the will, but ultimately lost their lawsuit in the Georgia Supreme Court which ruled: the “rights of each race were controlled and governed by the same enactment on principles of the law.” In 1892, Dickson married Nathan Toomer, a wealthy man of color, who fathered Harlem Renaissance writer Jean Toomer later in life (with Nina Pinchback). The movie A House Divided, starring Jennifer Beals, is based on Dickson’s life.

Research more about great woman of American History and share with your babies. Make it a champion day!