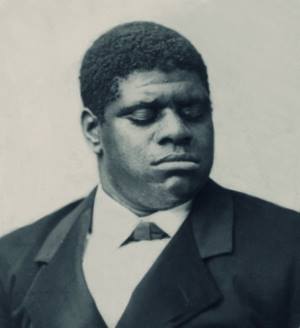 GM – FBF – Black Music Month is almost over and you have listened to and viewed some of the great Individual artists of our time. When I was getting my first Master’s in Wisconsin, Radio & Television Broadcasting. My teacher would always single me out since I was working on one of the biggest radio stations in the mid-west and he asked me did I know about “The Last Slave” and played :30 seconds of “The Battle of Manassas” being embarrassed I listened to Tom Wiggins, George Washington Johnson, Scott Joplin and W.C. Handy. Today let’s gain knowledge of “The Last Slave”, Enjoy!

Remember – Ray Charles attended school at the Florida School for the Deaf and the Blind in St. Augustine from 1937 to 1945 and his musical teacher Mrs. Lawrence would play some old beautiful songs by “The Last Slave” and always told me that I could be just as good as “Blind Tom Wiggins”, I set out to be better – Ray Charles

Thomas Greene Wiggins was born May 25, 1849 to Mungo and Charity Wiggins, slaves on a Georgia plantation. He was blind and autistic but a musical genius with a phenomenal memory. In 1850 Tom, his parents, and two brothers were sold to James Neil Bethune,a lawyer and newspaper editor in Columbus, Georgia. Young Tom was fascinated by music and other sounds, and could pick out tunes on the piano by the age of four. He made his concert debut at eight, performing in Atlanta.
In 1858 Tom was hired out as a slave-musician, at a price of $15,000. In 1859, at the age of 10, he became the first African American performer to play at the White House when he gave a concert before President James Buchanan. His piano pieces “Oliver Galop” and “Virginia” Polka” were published in 1860. During the Civil War he was back with his owner, raising funds for Confederate relief. By 1863 he played his own composition, “Battle of Manassas.” . This continued guardianship of Blind Tom by the Bethune family following emancipation caused some to refer to Wiggins as “the last slave.”
By 1865, 16-year-old Tom Wiggins, now “indentured” to James Bethune, could play difficult works of Bach, Chopin, Liszt, Beethoven, and Thalberg. He also played pieces after one hearing, and memorized poems and text in foreign languages. Advertising claimed Tom was untaught, but in fact he was tutored by a Professor of Music who traveled with him.
James Neil Bethune took Tom Wiggins to Europe where he collected testimonials from music critics Ignaz Moscheles and Charles Halle, which were printed in a booklet “The Marvelous Musical Prodigy Blind Tom.” With these and other endorsements, Blind Tom Wiggins became an internationally recognized performer. By 1868 Tom and the Bethune family lived on a Virginia farm in the summer, while touring the United States and Canada the rest of the year, averaging $50,000 annually in concert revenue. James Bethune eventually lost custody of Tom to his late son’s ex-wife, Eliza Bethune. Charity Wiggins, Tom’s mother, was a party to the suit, but she did not win control of her son or his income.
Blind Tom Wiggins gave his last performance in 1905.

He died three years later on June 13, 1908 at the age of 59 at his manager’s home in Hoboken, New Jersey. Blind Tom’s story became the subject of great interest around the turn of the twenty-first century. Articles about him have appeared in such periodicals as the New Yorker and the Oxford American, and in 1999 pianist John Davis made a new recording of fourteen of Blind Tom’s original pieces. In 2002 the 7 Stages Theatre in Atlanta produced a play based on Wiggins’s life entitled Hush: Composing Blind Tom Wiggins. Columbus State University holds a small collection of Blind Tom’s original sheet music. Research more about this great American artist and share with your babies. Make it a champion day!