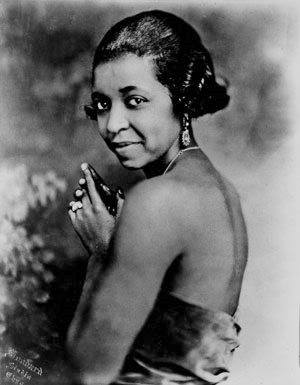 GM – FBF – Today as we are honoring Black Music Month, I have been with people who would say that Nate King Cole was the first black to have a T.V. show in the 1950″s and I would have to educate them. Let’s take a better look, Enjoy!

Remember – “One day, I pray that there will be more negros who will be on the small screen to tell are stories. – Ethel Waters ( Thank God she did live long enough to see her prayer come true)

Ethel Waters, one of the most influential jazz and blues singers of her time, popularised many song classics including “Stormy Weather”. Waters was also the first African-American woman to be given equal billing with white stars in Broadway shows, and to play leading roles in Hollywood films. Once she had established herself as one of America’s highest paid entertainers she demanded, and won, dramatic roles.

Single-handedly Waters shattered the myth that African-American women could perform only as singers. In the early 1950s, for example, she played a leading role in the stage and screen versions of Carson McCullers’ The Member of the Wedding. Ethel played a Southern mammy, but demonstrated with a complex and moving performance that it was possible to destroy the one-dimensional Aunt Jemima image of African American women in American theater and cinema.
In a career that spanned almost sixty years, there were few openings for an African-American woman of her class, talent and ability. She appeared on television as early as 1939 when she made two experimental programmes for NBC: The Ethel Waters Show and Mamba’s Daughters.

The Ethel Waters Show was a one-hour American television variety special that ran in the earliest days of NBC, on June 14,1939, and was hosted by actress and singer Ethel Waters. Waters was the first black performer, male or female, to have her own TV show and may very well have been the first black person to appear on television.The special was transmitted from the NBC Studios in New York over W2XBS.

The special included Waters performing a dramatic sequence from her most recent Broadway play Mamba’s Daughters, along with two actresses from the production, Georgette Harvey and Fredi Washington. The cast also included Joey Faye and Philip Loeb, performing skits.
But it was her regular role as the devoted, cheerful maid in ABC’s popular situation comedy Beulah (1950-52) that established her as one of the first African-American stars of the small screen.

Waters’ dramatic roles on television were also stereotyped. Throughout the 1950s she made appearances in such series as Favorite Playhouse, Climax, General Electric Theater, Playwrights ’56 and Matinee Theater. Without exception, Waters was typecast as a faithful mammy or suffering mother. In 1961 she gave a memorable performance in a Route 66 episode, “Good Night, Sweet Blues,” as a dying blues singer whose last wish is to be reunited with her old jazz band. Consequently Ethel became the first black actress nominated for an Emmy award. She later appeared in The Great Adventure (“Go Down Moses”), with Ossie Davis and Ruby Dee in 1963; Daniel Boone (“Mamma Cooper”) in 1970; and Owen Marshall, Counselor at Law (“Run, Carol, Run”) in 1972.

But, says African-American film and television historian
Donald Bogle in Blacks in American Films and Television (1988): “Waters’ later TV appearances lack the vitality of her great performances (she has little to work with in these programs and must rely on her inner resources and sense of self to get by), but they are part of her evolving image: now she’s the weathered, ailing, grand old woman of film, whose talents are greater than the projects with which she’s involved.”

In the late 1950s ill-health forced Waters into semi- retirement. A deeply religious woman, most of her public appearances were restricted to Billy Graham’s rallies. She died in 1977 at the age of 80. Resarch more about this great ‎American shero and share with your babies. Make it a champion day!