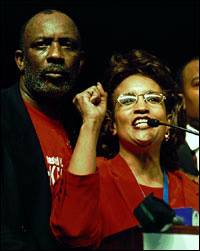 GM – FBF – Today, I want to tell you about a great American who was the first female bishop of the AME Church. Enjoy!

Today in our History – On July 11, 2000, journalist and clergywoman Vashti Murphy McKenzie became the first female bishop of the African Methodist Episcopal (AME) Church. In 2005 she became the denomination’s first woman to serve as Titular Head. Her commitment to community development is evident in her work with urban American cities as well as in AIDS-stricken Africa.

Bishop Vashti Murphy McKenzie was born on May 28, 1947 into a prominent Baltimore, Maryland family. Her great-grandfather John Henry Murphy, Sr. founded the Afro-American Newspaper in 1892, and her grandmother Vashti Turly Murphy was a founding member of Delta Sigma Theta, an African American college sorority. Bishop McKenzie graduated with a degree in journalism from the University of Maryland in 1978. She later earned a master’s of divinity from Howard University and a doctor of ministry from United Theological Seminary.

Bishop McKenzie began her career in journalism, working as a radio and television broadcaster and newspaper reporter before pursuing studies in divinity. After being ordained in 1984, she served as pastor for small congregations before being assigned in 1990 to the Payne Memorial AME Church in Baltimore’s inner city. Under her direction, the congregation grew from 300 to 1,700 members. She initiated community development projects including job service programs and a senior care center. Ten years later, at its annual convention in Cincinnati, the AME Church elected her to be its first female bishop, presiding over the 18th Episcopal District in southeast Africa. In that capacity she was responsible for several congregations in Africa comprised of nearly 10,000 people. Her project initiatives again centered on community development, encouraging entrepreneurial business programs and building mission housing. She also expanded services to homeless children and those infected with HIV/AIDS.

In 2005 she became the first woman to serve as Titular Head of the AME Church, overseeing the Council of Bishops as its president. She currently presides over the 13th Episcopal District.

She is the author of three books and is married to Stan McKenzie, a former professional basketball player who now works alongside of his wife as Episcopal Supervisor in her district. They have three children. McKenzie, Vashti. Research more about this great American and share with your babies. Make it a champion day!