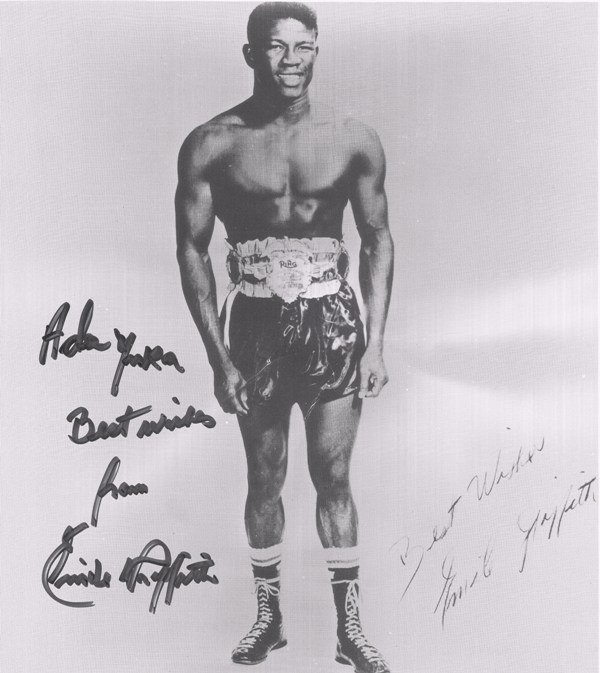 GM – FBF – Today I would like to share with you a story of a boxer who killed a man in the ring, which hurt his career from that to his last in the ring. Enjoy!

Remember – ” I did not want to kill him because we were friends but he called me a word that I would hurt anybody because that is not a good way to live.” – Emile Griffith.

Today in our History – July 23, 2013 – Boxer Emlie Griffith dies. Considered to be one of the best during his era.

Griffith came to the United States as a teenager and was encouraged to become a boxer by his employer, the owner of a hat factory. In 1958, after winning the New York Daily News and Intercity Golden Gloves amateur welterweight (147-pound) titles, he began his professional career. In his first 24 bouts as a professional, Griffith lost only twice, at which point he was given his first chance at a title bout. Griffith, who would hold the welterweight professional championship three times, first won it from Benny (“Kid”) Paret in a 13-round knockout on April 1, 1961; he lost it to Paret in a rematch by a 15-round decision on September 30, 1961; and he regained it by a knockout of Paret on March 24, 1962. This last fight resulted in tragedy when in the 12th round Griffith backed Paret into a corner and continued to punch him as he slumped against the ropes until the referee finally stepped in to stop the fight. Paret lapsed into a coma and died 10 days later. Griffith, who insisted that the brutality was not associated with remarks Paret had made prior to the bout about his sexuality, was shaken by the death and was never as aggressive in the ring. Despite this, Griffith successfully defended his world welterweight title twice in 1962 before surrendering it to Luis Rodríguez by a 15-round decision on March 21, 1963. On the rematch Griffith recaptured the title once more by a 15-round decision over Rodríguez on June 8, 1963.

On April 25, 1966, Griffith won the world middleweight (160-pound) title by outpointing champion Dick Tiger in 15 rounds. His attempt to retain both championships (contrary to U.S. boxing rules) was disallowed, and he relinquished the welterweight title. On April 17, 1967, he was defeated by Nino Benvenuti on points in a 15-round middleweight title match. On September 29 of that year, he won the middleweight championship for the second time by outscoring Benvenuti in 15 rounds, but he lost it again to Benvenuti by a 15-round decision on March 4, 1968. Griffith retired from the ring in 1977, with 85 wins (23 knockouts), 24 losses, and 2 draws. He was inducted into the International Boxing Hall of Fame in 1990. Research more about Black boxers and share with your babies. Make it a champion day!