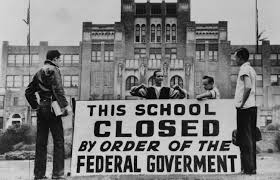 GM – FBF – Today, I would like to share with you a story that is always close to my heart because I was part of the Supreme Court decision of “Brown v Board”. In 1957 I was ready to go to an elementary school that had black teachers for black students (segregation) but with this new law we can now go to a new elementary school in East Trenton called Woodrow Wilson. I hated the school and the teachers who seemed not to want to be there and during lunch many frequented the bar at the end of the corner and took it out on us during the classes in the afternoon. I was told repeatedly that I would not amount to nothing Not knowing that it was part of a national crises at the time and in Arkansas it was no different. Remember and never forget!

Remember – “We conclude that, in the field of public education, the doctrine of “separate but equal” has no place. Separate educational facilities are inherently unequal.” – Chief Justice Earl Warren – U.S. Supreme Court

Today in Our History – September 24, 1957 – The Little Rock Nine was a group of nine African American students enrolled in Little Rock Central High School in 1957.

Their enrollment was followed by the Little Rock Crisis, in which the students were initially prevented from entering the racially segregated school by Orval Faubus, the Governor of Arkansas. They then attended after the intervention of President Dwight D. Eisenhower.

The U.S. Supreme Court issued its historic Brown v. Board of Education of Topeka, Kansas, 347 U.S. 483, on May 17, 1954. Tied to the 14th Amendment, the decision declared all laws establishing segregated schools to be unconstitutional, and it called for the desegregation of all schools throughout the nation. After the decision, the National Association for the Advancement of Colored People (NAACP) attempted to register black students in previously all-white schools in cities throughout the South. In Little Rock, the capital city of Arkansas, the school boardagreed to comply with the high court’s ruling. Virgil Blossom, the Superintendent of Schools, submitted a plan of gradual integration to the school board on May 24, 1955, which the board unanimously approved. The plan would be implemented during the fall of the 1957 school year, which would begin in September 1957.

By the end of September 1957, the nine were admitted to Little Rock Central High under the protection of the 101st Airborne Division (and later the Arkansas National Guard), but they were still subjected to a year of physical and verbal abuse (being spat on and called names) by many of the white students. Melba Pattillo had acid thrown into her eyes and also recalled in her book, Warriors Don’t Cry, an incident in which a group of white girls trapped her in a stall in the girls’ washroom and attempted to burn her by dropping pieces of flaming paper on her from above. Another one of the students, Minnijean Brown, was verbally confronted and abused. She said.

I was one of the kids ‘approved’ by the school officials. We were told we would have to take a lot and were warned not to fight back if anything happened. One girl ran up to me and said, ‘I’m so glad you’re here. Won’t you go to lunch with me today?’ I never saw her again.

Minnijean Brown was also taunted by members of a group of white male students in December 1957 in the school cafeteria during lunch. She dropped her lunch, a bowl of chili, onto the boys and was suspended for six days. Two months later, after more confrontation, Brown was suspended for the rest of the school year. She transferred to New Lincoln High School in New York City. As depicted in the 1981 made-for-TV docudrama Crisis at Central High, and as mentioned by Melba Pattillo Beals in Warriors Don’t Cry, white students were punished only when their offense was “both egregious and witnessed by an adult”. The drama was based on a book by Elizabeth Huckaby, a vice-principal during the crisis. Research more about this and other Civil Rights issues and share with your babies. Make it a champion day!