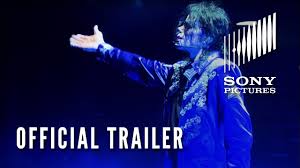 GM – FBF – Today’s story can only be told by people who lived through it. Coming out of Gary, Indiana in 1968, The Jackson’s were STARS with number one hits, T.V. specials and even a Saturday morning cartoon show. I personally saw him perform over his career six times between his brothers and by himself. His personal life and professional life is an open book and I feel sorry for how his life ended but so did Dorothy’s, “Bird” and Billie to name a few. I just know that he was better than what you saw in the move but at that part of his life I guess that was all that he had left. Enjoy!

Remember – “There were times when I had great times with my brothers, pillow fights and things, but I was, used to always cry from loneliness.” – Michael Jackson

Today in our History – October 28, 2009 – “THIS IS IT” the movie by Michael Jackson opens in Theaters.
The announcement earlier this year that Michael Jackson would be doing 50 concerts in London was greeted with equal parts euphoria and cynicism. Was he doing it for us? Was he doing it for money? Then in June, less than a month before the start of the sold-out run, Jackson died of cardiac arrest, and the news that a film of the show’s rehearsal footage was on the way added another layer of ambivalence. Awesome. Creepy. But, for now, “Michael Jackson’s This Is It’’ is the fierce last word on the matter. Jackson had no apparent plans to phone, fax, text, or IM it in.

The movie still arrives, screened for critics only hours before opening, with an eerie taint. It comes days before Halloween; its star, while far from death at the time, a diminished version of his electrifying self, his face a wan mask. Next weekend, that popular chiller about the couple in the haunted house won’t be the only paranormal activity at the box office. Yet watching Jackson pop, lock, rock, writhe, thrust, and clutch his crotch, even at 50 percent, leaves a feeling of woe: This show really would have been major.

Over the summer news outlets ran some of the footage – or footage very much like it. For a movie audience, the question is whether an hour and a half of the same will be any fun, especially when so much of it is barely camera-phone quality. The opening minutes seem doubtful. Jackson chops, poses, and slides through “Wanna Be Startin’ Something.’’ He doesn’t commit to any sort of vocal styling. And you can see him thinking about how to work the song out.

Watching a great artist decide how to move doesn’t seem much more exciting than watching a waiter set a table: When’s dinner? That, of course, is the terrible punch line of this entire experience: This is it. So, instead, we devour even Jackson’s lassitude. It’s our last supper. (Besides, what waiter is going to serve you wearing a tuxedo jacket with one sequined lapel and shoulders that look like something from a Tim Burton movie?)

Lest anyone get the morbid sense that the film is a necrophiliac’s delight, Jackson often feels vibrantly, reassuringly human. He sashays with one of his female dancers at one point. He puts the spotlight on his band and dancers, and his perfectionism never approaches divadom. When Jackson stands over the keyboard of the show’s musical director, trying to coax a note out of him, and says “I just want to hear it the way I wrote it,’’ what’s so funny is how little it is for him to ask. But also it’s a side of Jackson we never got to see. His Peter Pan syndrome and his professionalism truly coexist. He wants the show to be flawless. He also wants every element of the experience to appear to emanate from his every gesticulation. He’s a life force. He’s the Wiz.

He’s also a man with too much integrity to let anyone else call the shots. Indeed, the director of the concert and this movie, Kenny Ortega, seems more like a jolly personal assistant, repeatedly telling Jackson how much he loves him. It’s the sort of thing you expect to hear a fan blurt out as a movie star accepts an award. Jackson responds in kind: “I love you, too.’’
Ortega is a Hollywood veteran (he choreographed “Dirty Dancing’’ and directed the “High School Musical’’ franchise), and the movie is a dutiful tribute to its star. The crosscutting of footage isn’t seamless, but we get a decent sense of how most of the numbers would go. The crew filmed an inspired sequence in which Jackson inserts himself into classic Hollywood movies such as “Gilda’’ and “The Big Sleep,’’ alongside Rita Hayworth and Humphrey Bogart. The sequence is for “Smooth Criminal,’’ and it now has posthumous logic. Of course a legend plays with legends.

Clearly, Jackson expected just enough of himself to aim for some high points, even in these run-throughs. He tells the dancers and crew begging him to let go and really sing that he’s saving his voice for the actual performances. But you get the sense that he had to test how hard he could push that complex instrument. So even as he demurs when the band breaks out the gospel tambourine at the end of a Jackson Five medley, he still puts his foot into some of the songs. His singing voice is rarely more beautifully acrobatic than on the movie’s version of “Human Nature.’’

This all calls to mind the comeback concerts of Jackson’s friend Liza Minnelli, who hit Broadway last year at less than her best but was determined to bring the house down every night. There was no reason to think that Jackson wouldn’t have accomplished the same thing. Even if he didn’t manage to blow the crowds away 50 times, he would have risked it all trying. Research more about this American Black Entertainer and share with your babies. Make it a champion day!