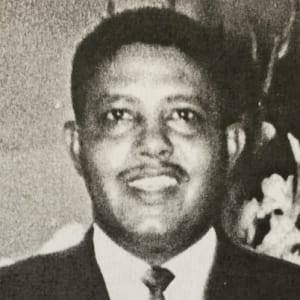 GM – FBF – Today’s Story is about John Cross Jr. who was the pastor at 16th Street Baptist Church in Birmingham, AL. where I had the pleasure of speaking a few years back. The
same church that was bombed in 1963, where the killing of four girls accrued. The event was a turning point in the Civil Rights Movement. Enjoy!

Remember – “Only a devil with no heart would do such an act and kill babies. – Rev. John Cross Jr

Today in Our History – November 15, 2007 John Cross Jr died.
.
Born in Haynes, Arkansas, on January 27, 1925, John Cross Jr. became a minister, educator and civil rights activist. In 1963, he was serving as pastor at the 16th Street Baptist Church in Birmingham, Alabama, when a bomb killed four young girls at the church. The attack was a turning point in the Civil Rights Movement. At the age of 82, Cross died on November 15, 2007, in Lithonia, Georgia.

John Haywood Cross Jr. was born on January 27, 1925, in Haynes, Arkansas, where he was raised by parents John and Margie Ann. John Cross Jr. attended elementary school in his hometown, and later went to Lincoln High School in Forrest City, Arkansas.

Cross was a teenager when he gave his first sermon; his ordination took place at Springfield Missionary Baptist Church. In 1944, after completing high school, he served in the U.S. Army as an assistant chaplain. When his service ended, he taught in the Haynes public school system before enrolling at Virginia Union University in Richmond, Virginia. Cross graduated from college in 1950 with a degree in social science.

Cross next served as a minister at Oak Grove Baptist Church in Widewater, Virginia. Wanting to pursue his theological studies, he returned to Virginia Union University and enrolled in a master’s program at the institution’s divinity school. He received his master’s degree in 1959. Staying in Richmond, he then became a pastor at the Gravel Hill Baptist Church.

In 1962, Cross was designated as pastor of the 16th Street Baptist Church in Birmingham, Alabama. The city was the site of conflict between supporters of segregation and civil rights activists. In a 1991 article, Cross described the heightened racial tensions that he experienced upon arriving in Birmingham. When he attempted to hail a taxicab, the white driver told him, “[I] don’t drive coloreds.” Cross responded, “I’ll tell you what, I’m coming here to pastor a church. Before I leave here, you’ll be hauling anybody who wants to be hauled.”

Encouraged by Dr. Martin Luther King Jr., Cross welcomed leaders of the Civil Rights Movement at his church. The house of worship was a nerve center for meetings and rallies, which resulted in Southern segregationists targeting the church. On September 15, 1963, a Sunday, a bomb was planted in the building. It went off before a youth service.

Cross was one of the people who dug through the rubble after the explosion, looking for survivors. He discovered the bodies of the four young girls who had been killed: Addie Mae Collins, Denise McNair, Carole Robertson and Cynthia Wesley. The attack also left more than 20 other worshippers injured. The atrocity became a turning point in the Civil Rights Movement, building support for the passage of the Civil Rights Act in 1964.

Cross helped lead his parishioners through the dark days following the tragedy. He also presided over the funeral service that was held for Collins, McNair and Wesley. Approximately 8,000 people came to the service.

In 1968, Cross left the 16th Street Baptist Church to teach history and sociology at Alabama State University. He also served as director of the university’s Baptist student center. In 1972, Cross became the associate pastor of the Oakhurst Baptist Church in Decatur, Georgia. A few years later, he started working as the black church relations director for the Atlanta Baptist Association. After retiring in 1989, Cross worked part-time as a minister and youth counselor.

Cross met Julia Ball at Virginia Union University. After marrying in 1949, the couple had four children: Michael, Alma, Lynn and Barbara. Cross enjoyed visiting his hometown, stating that his favorite vacation destination was Haynes, Arkansas. Having suffered a series of strokes in his later years, Cross passed away on November 15, 2007, at age 82, in Lithonia, Georgia. Research more about Black Reverends who fight/fought for civil rights and share with your babies. Make it a champion day!