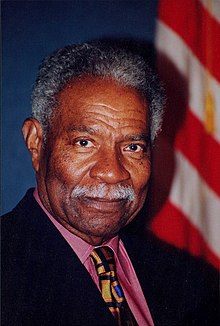 GM – FBF – Today’s story is about a person was an American film, television and Broadway actor, director, poet, playwright, author, and civil activist.

He was married to Ruby Dee, with whom he frequently performed, until his death in 2005.

He and his wife were named to the NAACP Image Awards Hall of Fame; were awarded the National Medal of Arts and were recipients of the Kennedy Center Honors. He was inducted into the American Theater Hall of Fame in 1994. Enjoy!

Remember – “College ain’t so much where you been as how you talk when you get back.” – Ossie Davis

Ossie Davis was a twentieth century renowned African-American film and television artist and Broadway actor. Besides that, he was also known for his work as a playwright, poet and author. Being an actor and author, Davis had a sensitive side which made him conscious of social problems faced by his race which he tried to bring to light as a social activist.

Davis was named Raiford Chatman Davis on his birth. He was born on December 18, 1917, in Cogdell, Clinch County, Georgia. He came to known as Ossie when a country clerk mistaken R. C for Ossie upon his birth. As it was a regular occupation for white people to threaten and bully the blacks, Davis family was no less a victim of this cruelty. His father was threatened to be shot for occupying such a major work post for a black man. Despite facing the extreme racism, Davis had been able to attend school and was later sent to Howard University. However, he dropped out in 1939 in order to follow his dream career of acting but not before he finished a course at Columbia University School of General Studies.

1939 was the year when he first embarked upon his eight decade long journey of his acting career. He had to face the similar problems as all the black community did when they made any meaningful career choice, such as strong resistance from white. They were allowed to play only stereotypical and low-profile characters. Nevertheless, Davis had different plans as he wanted to play something significant following the example of Sidney Poitier. The struggle for a major role was inevitable for a beginner like himself so he was offered roles like that of a butler or porter. In order to make a difference, he took on whatever small roles came his way very seriously and made them non-stereotypical.

After experiencing career as an actor, he aspired to become a director. Eventually, Ossie Davis became one of the stellar directors of his time along with Melvin Van Peebles, and Gordon Parks. He is credited with directing some notable films including the famous action film Cotton Comes to Harlem, Black Girl and Gordon’s Work. He was one of the few African American actors who found commercial success in such a cut-throat competitive industry as Hollywood. He acted along with Sean Conner in the 1965 movie The Hill and in other films including, The Scalphunters and The Cardinal. He was successful but his success didn’t exceed to massive commercial and critical fame that his contemporaries Bill Cosby and Sidney Poitier savored.

In addition to acting and directing, Davis also wrote plays for theater. His Paul Robeson: All-American was often performed in various theaters and enjoyed by the youth. It was not until his late acting career that he received recognition by working in films such as Jungle Fever, Do The Right Thing and She Hate Me. Moreover, he worked as a voice-over artist in the early 1990s CBS sitcom, Evening Shade. Having a unique personality, Davis was requested to host the annual National Memorial Day Concert from Washington, DC. His final acting project included numerous guest roles. One that stands out amongst others was the Showtime drama series The L Word. Ossie Davis passed away on February 9, 2005, in Florida. Research more about this great American talent and share with your babies. Make it a champion day!