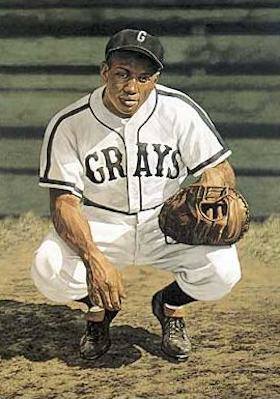 GM – FBF – Growing up in the inner city was not an easy thing, and today it is even worse for many. The part of Trenton, N.J. (East Trenton) where I grew up did not have any organized Little League Baseball teams as they did on the other parts of town and if you tried to work out and slip past them naturally they asked for your address and send us back home. So all we could do is play wall ball, stick ball or half ball.

We were happy that a young man from our church (Eddie Courtney) would takes out at on Saturday afternoons and go over fundamentals but we never played against anyone. They all changed when my brother, I and others finally got to Junior High School and tried out and make the Junior High Varsity School team all three years. The only saving grace was going to Lawnside, N.J. (Lawnside was developed and incorporated as the first independent, self-governing black municipality north of the Mason-Dixon Line in 1840. The United Parcel Service has a large depot in the borough.)

During segregation and (yes there was segregation up North) we could meet, watch and speak with many of the black entertainers of the day at my Great Uncle’s restaurant and park area. I was fortunate to meet a lot of famous people but since I loved baseball, watching and playing with some of the young baseball stars was the best because no matter the conversation it always got back to today’s story great, Enjoy!

Remember – “Playing winter ball was the best because we could finally play against some white professional baseball players and showed then that we in the Negro Leagues were just as good or even better than most of them.” – Josh Gibson

Josh Gibson (December 21, 1911 – January 20, 1947) was an American Negro League professional baseball player. He was born in Buena Vista, Georgia on December 21, 1911. His father had a farm there but he moved the family to Pittsburgh, Pennsylvania. Gibson was studying to be an electrician and only attended school till the 9th grade. He did not play baseball for a team until the age of 16, when he played for an amateur team sponsored by the department store where he worked. After this he was recruited by a semi-professional baseball team called the Pittsburgh Crawfords.

The team gained professional status in 1931. Gibson himself played his first professional game in 1930. He was sitting in the stands during a Gray’s game but one of their catchers named Buck Ewing was injured and Gibson was invited to replace him.

Gibson was married to Helen Mason in 1929 at the age of 17. The next year, he was recruited by a team called the Homestead Grays, the top Negro league team in Pittsburgh. Soon after he debuted for the team, his wife went into labor and died due to complications during delivery. The twins Helen gave birth to survived, and were raised by her mother.

Josh Gibson has often been called one of baseball’s greatest home run hitters. The Negro leagues scheduled games within the league, as well as barnstorming games against semi-professional and non-league teams. Although there are no published or organized records of league scores in different seasons, Gibson’s record in both types of games have been outstanding. He had a sturdy built with a 6 foot 1 inch frame, a powerful throw and agility and speed while stopping players from stealing bases. He became the second highest paid player in the black league after Satchel Paige, another future hall of fame player. One of his records was a 580 foot home run, which almost reached the top of the bleacher. The leading sports writers of the time compared him to legends like Babe Ruth and Ted Williams.

Various statistics have been compiled from sources across the country. According to some records, Gibson hit more than 800 home runs during his league and other games. This is also what is etched on his plaque in the hall of fame. According to other sources, Gibson hit somewhere between 150 and 200 home runs in the official Negro league games. It must be noted that many games were played against much more inferior teams; therefore the recorded number of home runs may be higher due to that. However, this was countered by the fact that Negro league seasons were much shorter than regular major league seasons and they played fewer games as compared to them. Regardless of these factors, Gibson’s statistics are comparable to any of the foremost players in major league baseball.

Josh Gibson was diagnosed with a brain tumor at the age of 31. He fell into a coma, and refused to be treated when he came out. He outlived the tumor for four years, but had constant recurring headaches. He was hospitalized on and off, and died on January 20, 1947, at the age of 35. He was buried in an unmarked grave, but a small plaque was later put there. Three months before he died, Jackie Robinson became the first black player to be inducted into the National League. Many believe it was Gibson who deserved that honor. He has since been honored with an induction into the National Baseball Hall of Fame. Research more about the Negro baseball league and share with your babies. Make it a champion day!