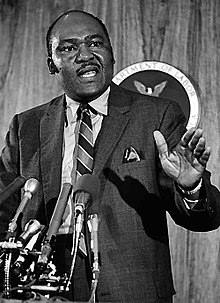 GM – GBF – Today’s story is about a person who was called the “Father of affirmative action,” who headed the U.S. Civil Rights Commission in the 1990s and advised four Republican presidents had many Kansas ties.

Remember – “A mind is a terrible thing to waste” – Arthur A. Fletcher

Arthur A. Fletcher organized his first civil rights protest at the Junction City Junior/Senior High School in 1943: he refused to allow his high school picture and those of the other African American students in his class to appear at the back of the school yearbook. He Fletcher continued to fight for civil rights by devising and implementing strategies to move America’s social culture to one of inclusion. He served under two U.S. presidents, in government positions at all levels, as head of nonprofit organizations, and was the highest-ranking African American official in President Richard Nixon’s administration.

Born in 1924 in Phoenix, Arizona, the Fletcher family moved frequently until Fletcher graduated from high school in Junction City, Kansas. Fletcher graduated from Washburn University, Topeka, with a degree in political science and sociology. Football was Fletcher’s sport and he excelled on Washburn’s team before joining the Los Angeles Rams in 1950. He went on to play for the Baltimore Colts as their first African American team member. Following a short stint on a Canadian football team, Fletcher retired from the sport and turned his attention to social change.

Fletcher’s political career began in Kansas where he worked on Fred Hall’s campaign for governor in 1954. His first position in state government was with the Kansas Highway Commission. By learning how government contracts were awarded, Fletcher encouraged African American business to compete.

In 1969 President Nixon appointed Fletcher to the post of assistant secretary of wage and labor standards in the Department of Labor. Here he developed and administered the “Philadelphia Plan” to enforce equal employment and opportunity for minority businesses pursuing government-funded contracts. Fletcher believed that without economic security all of the social gains made by African Americans would be meaningless. Later Fletcher was appointed by President Gerald Ford as deputy advisor of Urban Affairs. Here Fletcher became known as the father of the Affirmative Action Enforcement Movement.

In 1972, following his career with the federal government, Fletcher took the position of executive director of the United Negro College Fund and helped coin the phrase “a mind is a terrible thing to waste.”

Fletcher later operated a business that trained companies to comply with the governmental equal opportunity regulations. He died July 12, 2005 in Washington, D.C. Research more about black people who served in government and share with your babies. Make it a champion day!