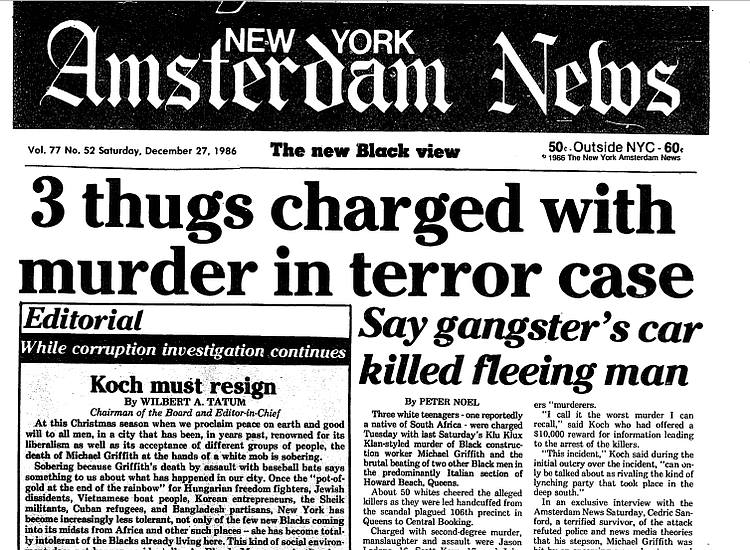 GM – FBF – Today’s story is a painful one because it is close to home being that I am from New Jersey and it was nothing for us to go to NYC or any of the five sections known as Burrows. In the 1980s, several racially motivated attacks dominated the headlines of New York City newspapers. On September 15, 1983, artist and model Michael Stewart died on a lower Manhattan subway platform from a chokehold and beating he received from several police officers. A year later, on October 29, an elderly grandmother, Eleanor Bumpers, was murdered by a police officer in her Bronx apartment as he and other officers tried to evict her.

Later that year, on December 22, a white man, Bernhard Goetz, shot and seriously wounded four black teenagers he thought were going to rob him on a subway train in Manhattan. The Howard Beach racial incident in late 1986 propelled the predominantly Italian and Jewish community into the national spotlight, exposing racial hatred in New York City. Enjoy!

Remember – “I could recall 25 years ago as a kid, I would not recommend anyone black stopping there,” said Representative Gregory W. Meeks, who is black and represents Old Howard Beach, east of Cross Bay Boulevard. “Today, it’s definitely a different place.”

Today in our History – On December 20, 1986, a black man was killed and another was beaten in Howard Beach, Queens, New York, United States in a racially charged incident that heightened racial tensions in New York City.

The man attacked was 23-year-old Michael Griffith (March 2, 1963 – December 20, 1986), who was from Trinidad and had immigrated to the United States in 1973, and lived in Crown Heights, Brooklyn. He was killed after being hit by a car as he was chased onto a highway by a mob of white youths who had beaten him and his friends. Griffith’s death was the second of three infamous racially motivated killings of black men by white mobs in New York City in the 1980s. The other victims were Willie Turks in 1982 and Yusuf Hawkinsin 1989.

Late on the night of Friday, December 19, 1986, four black men, Michael Griffith, 23; Cedric Sandiford, 36; Curtis Sylvester and Timothy Grimes, both 20, were riding in a car when it broke down in a deserted stretch of Cross Bay Boulevard near the Broad Channelneighborhood of Queens. Three of the men walked about three miles north to seek help in Howard Beach, a mostly white community, while Sylvester remained behind to watch the car. They argued with some white teens who were on their way to a party, then left.

By 12:30 a.m. on the 20th, the men reached the New Park Pizzeria, near the intersection of Cross Bay Boulevard and 157th Avenue. After a quick meal the men left the pizzeria at 12:40 a.m. and were confronted by a group of white men, including the group they had earlier confronted. When Sandiford, Grimes, and Griffith left the restaurant at 12:40 a.m., a mob of twelve white youth awaited them with baseball bats, tire irons, and tree limbs. The gang, led by Jon Lester, 17, included Salvatore DeSimone, 19, William Bollander, 17, James Povinelli, 16, Michael Pirone, 17, John Saggese, 19, Jason Ladone, 16, Thomas Gucciardo, 17, Harry Bunocore, 18, Scott Kern, 18, Thomas Farino, 16, and Robert Riley, 19.

Racial slurs were exchanged and a fight ensued. Sandiford and Griffith were seriously beaten; Grimes escaped unharmed. The mob attacked Griffith and Sandiford. Grimes, who drew a knife on the angry mob, escaped with minor injuries. Sandiford begged, “God, don’t kill us” before Lester knocked him down with a baseball bat. With the mob in hot pursuit, the severely beaten Griffith ran the nearby Belt Parkway where he jumped through a small hole in a fence adjacent to the highway. As he staggered across the busy six-lane expressway, trying to escape his attackers, he was hit and instantly killed by a car driven by Dominic Blum, a court officer and son of a New York police officer. His body was found on theBelt Parkway at 1:03 a.m.

Griffith’s death provoked strong outrage and immediate condemnation by then-Mayor of New York City Ed Koch, who referred to the case as the “No. 1 case in the city”. Two days after the event, on December 22, three local teenagers, Jon Lester, Scott Kern, and Jason Ladone, students at John Adams High School, were arrested, and charged with second-degree murder. The driver of the car that struck Griffith, 24-year-old Dominick Blum, was not charged with any crime; a May 1987 grand jury did not return criminal charges against him.

To protest the killing of Griffith, 1,200 demonstrators marched through the streets of Howard Beach on December 27, 1986. A heavy NYPD presence kept angry white locals, who were screaming at the crowd of marchers, in check.
The Griffith family, as well as Cedric Sandiford, retained the services of Alton H. Maddox and C. Vernon Mason(who was later disbarred), two attorneys who would become involved in the Tawana Brawley affair the following year. Maddox raised the ire of the NYPD and Commissioner Benjamin Ward by accusing them of trying to cover up facts in the case and aid the defendants.

After witnesses repeatedly refused to cooperate with Queens D.A. John J. Santucci, Governor of New York Mario Cuomo appointed Charles Hynes special prosecutor to handle the Griffith case on January 13, 1987. The move came after heavy pressure from black leaders on Cuomo to get Santucci, who was seen as too partial to the defendants to prosecute the case effectively, off the case.

Twelve defendants were indicted by a grand jury on February 9, 1987, including the original three charged in the case. Their original indictments had been dismissed after the witnesses refused to cooperate in the case.

After a lengthy trial and 12 days of jury deliberations, the three main defendants were convicted on December 21, 1987 of manslaughter, a little over a year after the death of Griffith. Kern, Lester and Ladone were convicted of second-degree manslaughter and Michael Pirone, 18, was acquitted. Ultimately nine people would be convicted on a variety of charges related to Griffith’s death.

In December 1999, the block where Griffith had lived was given the additional name “Michael Griffith Street.”
Jason Ladone, then 29, was released from prison in April, 2000 after serving 10 years, and later became a city employee. He was arrested again in June 2006, on drug charges. In May 2001, Jon Lester was released and deported to his native England where he studied electrical engineering and started his own business. He died on August 14, 2017 at age 48 of what some suspect was a suicide. He left behind a wife and three children.[10] Scott Kern was released from prison, last of the three main perpetrators, in 2002.

In 2005 the Griffith case was brought back to the public’s attention after another racial attack in Howard Beach. A black man, Glenn Moore, was beaten severely with a metal baseball bat by Nicholas Minucci, who was convicted of hate crimes in 2006. The case was revisited yet again by the media, after the death of Michael Sandy, 29, who was beaten and hit by a car after being chased onto the Belt Parkway in Brooklyn, New York, in October 2006. Research more about Black harassment in communities and share with your babies. Make it a champion day!