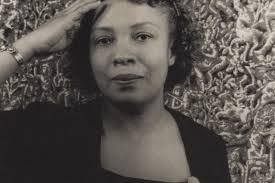 GM – FBF – How many Black people that you have in your family that were the first to graduate as a person of color from a University or College with a Bachelors or Master’s Degree? How many in your family had a professional physician or a sports champion as a Mother and Father? To whom a lot is given – a lot is expected. Today’s story is an example of such for our people. Enjoy!

Remember – “The story of our people needs to be told the correct way, not just our hardships but all of the knowledge and power that we have done for the human race. Rise up and tell the true story” – Dorothy Bennett

Dorothy Porter Wesley (1905-1995), a scholar-librarian and bibliographer was born in Warrenton, Virginia in 1905, and grew up in Montclair, New Jersey to her father, Hayes Joseph Burnett, a physician, and her mother, Bertha Ball Burnett, a tennis champion. After receiving her A.B., from Howard University in 1928, she became the first African American woman to complete her graduate studies at Columbia University receiving a Bachelors (1931) and a Masters (1932) of Science in Library Science.

Porter Wesley once remarked that “Too much of our heritage, until recently, has been lost because there were not enough collectors among us.” Fortunately for those of us who are and have been involved in Black history, one of those collectors was Dr. Porter Wesley. Beginning in 1930 and continuing for more than four decades, Dr. Porter Wesley devoted her life to identifying and acquiring for Howard University many thousands of books, newspapers, journals and other materials which provided the documentation of the Black experience in Africa, the Americas and other parts of the world.

While Dr. Jessee E. Moorland receives the well-earned acknowledgement of having provided at Howard University a foundation for historical research on people of African descent, it is Dorothy Porter Wesley who deserves the credit for transforming the potential of Moorland’s gift and other related material into a repository widely hailed as one of the very best at the time of her retirement in 1973. Scholars and librarians continue to marvel at the success she was able to achieve under often difficult circumstances. All that the Moorland-Spingarn Research Center is today is a result of the groundwork laid by her.

In 1973, Letitia Woods Brown said Porter Wesley “has the broadest understanding of Black bibliography of anyone living. If it has been written or even spoken about, Dorothy Porter knows.” A few years earlier, Faith Berry described her in an article on Black archives as “a human encyclopedia who can tell you everything about Negro life and history that’s ever been printed or unprinted.” While caution tells us that such accolades must be tempered with reality, experience tells us that neither writer greatly exaggerated the depth and breadth of Dr. Porter Wesley’s prodigious knowledge of Black history and culture.

In 1969, Dr. Porter Wesley wrote that “the wise accumulation of books and documents by the early great bibliophiles … was doubtless the seed of a tremendous harvest. But if we are not to be overwhelmed by its very richness and excess in the domain of Black studies, it must be met with a steady and dedicated and confident librarianship as much as with appreciative, systematic, and productive exploitation by knowledgeable and competent scholars. In these critical times we can hardly afford to neglect the advantages of such an intellectual and practical partnership.”
Not only did Dr. Porter Wesley promote such partnership, but she was long the embodiment of the scholar-librarian. She knew the great bibliophiles and collectors like Moorland, Arthur B. Spingarn, C. Glenn Carrington, Arthur A. Schomburg, Henry P. Slaughter, Clarence Holte, and Charles Blockson. She knew and assisted the many important scholars at Howard University, and scholars elsewhere who shared an interest in Black history. She knew the writers, historians and others who would contribute to the corpus of our history.
She was not only a professionally trained librarian, but also a prolific author and bibliographer who published numerous books and scores of articles, reviews and other pieces. In addition to her master’s thesis, “Afro-American Writings Published Before 1835,” Dr. Porter Wesley also wrote “African and Caribbean Creative Writing,” Afro-Braziliana, “… American Negro Writers About Africa,” and on such disparate subjects as family records in New England, David Ruggles, Howard University, Maria Louise Baldwin, Sarah Parker Remond, “The Negro in American Cities,” “The Negro in the Brazilian Abolition Movement,” Negro literary societies, archival preservation, Negro protest pamphlets, and Africa. Her major works include The Negro in the United States (1970) and Early Negro Writing, 1760-1837, republished by Black Classic Press in 1995.

Dr. Porter Wesley received honorary degrees from Syracuse University, Radcliffe College and Susquehanna University, the Distinguished Alumni Award from Howard University, a Julius Rosenwald Fellowship for research in Latin American literature, a Ford Foundation study and travel grant which took her to Scotland, Ireland, England and Italy, and a fellowship from the W.E.B. DuBois Institute at Harvard University. Dr. Porter Wesley served as a Ford Foundation consultant to the National Library in Lagos, Nigeria (1962-64), and she attended the 1st International Congress of Africanists in Accra, Ghana, in 1962.

Dr. Porter Wesley also contributed her talents to the Society of American Archivists, the Nigerian Historical Society, the African Studies Association the Bibliographical Society of America, the Black Academy of Arts and Letters, the National Trust for the Preservation of Historic Sites, and the Association for the Study of African American Life and History.
In 1994 President Clinton presented her with the National Endowment for the Humanities’ Charles Frankel Award.
She was unstinting in the time she spent as a librarian and a scholar in sharing her knowledge with a host of scholars, prompting Benjamin Quarles to say, in 1973, that “without exaggeration, there hasn’t been a major history book in the last 30 years in which the author hasn’t acknowledged Mrs. Porter’s help.” While this may have abated somewhat in more recent years, the need for Dr. Porter Wesley’s advice and counsel was still very much evident among the current generation of students and scholars.

Those of us who know how difficult the task is of documenting a people’s history realize and appreciate the extraordinary success Dr. Porter Wesley achieved in times far more difficult than those we face today. She built the house and we are its caretakers — trying our best to deserve the wonderful legacy she has left for this and future generations.

Dorothy Porter Wesley stands among those giants of historical inquiry who have helped to focus an understanding of the contributions people of African descent have made to world society. She embodied the spirit of our people and inspired all of those who love our people’s history. She has left her mark, and it is truly indelible. Research more about Black’s who writers are or poet’s and share with your babies. Make it a champion day!