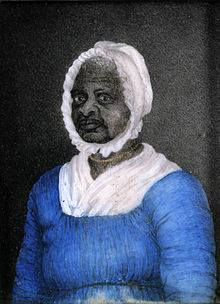 Remember – “Any time, any time while I was a slave, if one minute’s freedom had been offered to me, and I had been told I must die at the end of that minute, I would have taken it—just to stand one minute on God’s airth [sic] a free woman— I would.” — Elizabeth Freeman

Freeman was illiterate and left no written records of her life. Her early history has been pieced together from the writings of contemporaries to whom she told her story or who heard it indirectly, as well as from historical records.

Freeman was born into slavery around 1744 at the farm of Pieter Hogeboom in Claverack, New York, where she was given the name Bet. When Hogeboom’s daughter Hannah married John Ashley of Sheffield, Massachusetts, Hogeboom gave Bet, around seven years old, to Hannah and her husband. Freeman remained with them until 1781, during which time she had a child, Little Bet. She is said to have married, though no marriage record has been located. Her husband (name unknown) is said to have never returned from service in the American Revolutionary War.

Throughout her life, Bet exhibited a strong spirit and sense of self. She came into conflict with Hannah Ashley, who was raised in the strict Dutch culture of the New York colony. In 1780, Bet prevented Hannah from striking a servant girl with a heated shovel; Elizabeth shielded the girl and received a deep wound in her arm. As the wound healed, Bet left it uncovered as evidence of her harsh treatment. John Ashley was a Yale-educated lawyer, wealthy landowner, businessman and leader in the community. His house was the site of many political discussions and the probable location of the signing of the Sheffield Resolves, which predated the Declaration of Independence.

In 1780, Freeman heard the newly ratified Massachusetts Constitution read at a public gathering in Sheffield, including the following:

All men are born free and equal, and have certain natural, essential, and unalienable rights; among which may be reckoned the right of enjoying and defending their lives and liberties; that of acquiring, possessing, and protecting property; in fine, that of seeking and obtaining their safety and happiness. — Massachusetts Constitution, Article 1.

Inspired by these words, Bett sought the counsel of Theodore Sedgwick, a young abolition-minded lawyer, to help her sue for freedom in court. According to Catherine Sedgwick’s account, she told him, “I heard that paper read yesterday, that says, all men are created equal, and that every man has a right to freedom. I’m not a dumb critter; won’t the law give me my freedom?” After much deliberation Sedgwick accepted her case, as well as that of Brom, another of Ashley’s slaves. He enlisted the aid of Tapping Reeve, the founder of Litchfield Law School, one of America’s earliest law schools, located in Litchfield, Connecticut. They were two of the top lawyers in Massachusetts, and Sedgwick later served as US Senator. Arthur Zilversmit suggests the attorneys may have selected these plaintiffs to test the status of slavery under the new state constitution.

The case of Brom and Bett v. Ashley was heard in August 1781 before the County Court of Common Pleas in Great Barrington. Sedgwick and Reeve asserted that the constitutional provision that “all men are born free and equal” effectively abolished slavery in the state. When the jury ruled in Bett’s favor, she became the first African-American woman to be set free under the Massachusetts state constitution.
The jury found that “…Brom & Bett are not, nor were they at the time of the purchase of the original writ the legal Negro of the said John Ashley…” The court assessed damages of thirty shillings and awarded both plaintiffs compensation for their labor. Ashley initially appealed the decision, but a month later dropped his appeal, apparently having decided the court’s ruling on constitutionality of slavery was “final and binding.”

After the ruling, Bett took the name Elizabeth Freeman. Although Ashley asked her to return to his house and work for wages, she chose to work in attorney Sedgwick’s household. She worked for his family until 1808 as senior servant and governess to the Sedgwick children, who called her “Mumbet.” The Sedgwick children included Catharine Sedgwick, who became a well-known author and wrote an account of her governess’s life. Also working at the Sedgwick household during much of this time was Agrippa Hull, a free black man who had served with rebel forces for years during the Revolutionary War.

From the time Freeman gained her freedom, she became widely recognized and in demand for her skills as a healer, midwife and nurse. After the Sedgwick children were grown, Freeman moved into her own house on Cherry Hill in Stockbridge near her daughter, grandchildren and great grandchildren.

Freeman’s real age was never known, but an estimate on her tombstone puts her age at about 85. She died on December 28,1829 and was buried in the Sedgwick family plot in Stockbridge, Massachusetts. Freeman remains the only non-Sedgwick buried in the Sedgwick plot. They provided a tombstone, inscribed as follows:
ELIZABETH FREEMAN, also known by the name of MUMBET died Dec. 28th 1829. Her supposed age was 85 Years. She was born a slave and remained a slave for nearly thirty years; She could neither read nor write, yet in her own sphere she had no superior or equal. She neither wasted time nor property. She never violated a trust, nor failed to perform a duty. In every situation of domestic trial, she was the most efficient helper and the tenderest friend. Good mother, farewell.

The decision in the case of Elizabeth Freeman was cited as precedent when the Massachusetts Supreme Judicial Court heard the appeal of Quock Walker v. Jennison later that year and upheld Walker’s freedom. These cases set the legal precedents that ended slavery in Massachusetts. Vermont had already abolished it explicitly in its constitution.

Civil Rights leader and historian W. E. B. Du Bois claimed Freeman as his relative and wrote that she married his maternal great-grandfather, “Jack” Burghardt. But, Freeman was 20 years senior to Burghardt, and no record of such a marriage has been found. It may have been Freeman’s daughter, Betsy Humphrey, who married Burghardt after her first husband, Jonah Humphrey, left the area “around 1811”, and after Burghardt’s first wife died (c. 1810). If so, Freeman would have been Du Bois’s step-great-great-grandmother. Anecdotal evidence supports Humphrey’s marrying Burghardt; a close relationship of some form is likely.

Season 1, episode 37 of the television show Liberty’s Kids, titled “Born Free and Equal”, is about her. It was first aired in 2003, and in it she is voiced by Yolanda King. Research more about the struggle of Black’s and the courts and share with your babies. Make it a champion day!