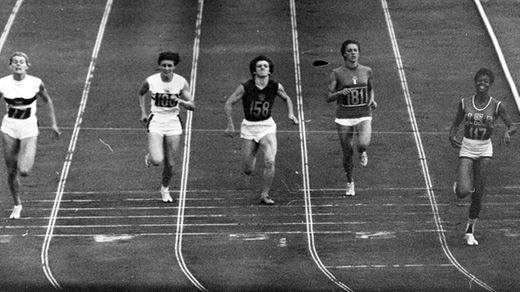 GM – FBF – “I believe in me more than anything in this world.” Wilma Rudolph

Remember – “Never underestimate the power of dreams and the influence of the human spirit. We are all the same in this notion: The potential for greatness lives within each of us. – “Wilma Rudolph

Wilma Rudolph was a sight to behold. At 5-foot-11 and 130 pounds, she was lightning fast. Wilma watchers in the late 1950s and early ’60s were admonished: don’t blink. You might miss her. And that would be a shame.

Wilma Rudolph was the first American woman to win three gold medals in one Olympics.

At the 1960 Rome Olympics, Rudolph became “the fastest woman in the world” and the first American woman to win three gold medals in one Olympics. She won the 100- and 200-meter races and anchored the U.S. team to victory in the 4 x 100-meter relay, breaking records along the way.

In the 100, she tied the world record of 11.3 seconds in the semifinals, then won the final by three yards in 11.0. However, because of a 2.75-meter per second wind — above the acceptable limit of two meters per second — she didn’t receive credit for a world record. In the 200, she broke the Olympic record in the opening heat in 23.2 seconds and won the final in 24.0 seconds. In the relay, Rudolph, despite a poor baton pass, overtook Germany’s anchor leg, and the Americans, all women from Tennessee State, took the gold in 44.5 seconds after setting a world record of 44.4 seconds in the semifinals.

Rudolph’s Olympic performances (she also won a bronze medal at age 16 in the relay at Melbourne in 1956) were spectacular. But it is the story of how she got there that makes her accomplishments legendary.

She was born prematurely on June 23, 1940 in St. Bethlehem, Tenn. She weighed 4 1/2 pounds. The bulk of her childhood was spent in bed. She suffered from double pneumonia, scarlet fever and later she contacted polio. After losing the use of her left leg, she was fitted with metal leg braces when she was 6.

“I spent most of my time trying to figure out how to get them off,” she said. “But when you come from a large, wonderful family, there’s always a way to achieve your goals.”

Rudolph grew up in a poor family, the 20th of her father Ed’s 22 children (from two marriages). Although she never shared a home with all her siblings and half-siblings at once, there were still plenty of brothers and sisters to serve as “lookouts” if she mischievously removed her braces.

Her brothers and sisters took turns massaging her crippled leg every day. Once a week her mother Blanche, a domestic worker, drove her 90 miles roundtrip to a Nashville hospital for therapy.

Years of treatment and a determination to be a “normal kid” worked. Despite whooping cough, measles and chicken pox, Rudolph was out of her leg braces at age 9 and soon became a budding basketball star.

At the all-African-American Burt High School, Rudolph played on the girls’ basketball team, where her coach, C.C. Gray, gave her the nickname, “Skeeter.”

“You’re little, you’re fast and you always get in my way,” he said.

Rudolph became an all-state player, setting a state record of 49 points in one game. Then Ed Temple came calling.

Temple, the Tennessee State track coach, asked Gray to form a girls’ track team so he could turn one of the forwards into a sprinter. And Wilma was the one.

She had natural ability she couldn’t explain. “I don’t know why I run so fast,” she said. “I just run.”

She loved it enough to begin attending Temple’s daily college practices while still in high school. Temple’s dedication was inspiring. He was a sociology professor at Tennessee State and unpaid coach. He drove the team to meets in his own car and had the school track, an unmarked and unsurfaced dirt oval, lined at his own expense.

But Temple was no soft touch. He made the girls run an extra lap for every minute they were late to practice. Rudolph once overslept practice by 30 minutes and was made to run 30 extra laps. The next day she was sitting on the track 30 minutes early.

Unity and teamwork were Temple’s passions. He reminded reporters after Rudolph became famous that there were three other gold medalists on the platform with her during the relay event. Almost the entire 1960 Olympic team, coached by Temple, came from his Tennessee State team.

Rudolph didn’t forget her teammates, either. She said her favorite event was the relay because she got to stand on the platform with them. Regardless, the press and fans in Rome flocked to her.

The newspapers called her “The Black Pearl” and “The Black Gazelle.” After the Olympics, when the team competed in Greece, England, Holland and Germany, it was the charming, beautiful Rudolph, fans wanted to watch perform.

Sports Illustrated reported that mounted police had to keep back her admirers in Cologne. In Berlin, fans stole her shoes then surrounded her bus and beat on it with their fists until she waved.

“She’s done more for her country than what the U.S. could have paid her for,” Temple said.

She did more than promote her country. In her soft-spoken, gracious manner, she paved the way for African-American athletes, both men and women, who came later.

When she returned from Rome, Tennessee Gov. Buford Ellington, who was elected as “an old-fashioned segregationist,” planned to head her welcome home celebration. Rudolph said she would not attend a segregated event.

Rudolph’s parade and banquet were the first integrated events in her hometown of Clarksville.

“It was a great thrill for me to see,” Rudolph said. “I thought I’d never get to see that. Florence Griffith Joyner — every time she ran, I ran.”

Bob Kersee, husband and coach of Jackie Joyner-Kersee, said Rudolph was the greatest influence for African-American women athletes that he knows. His wife went further. “She was always in my corner,” said Joyner-Kersee, winner of six Olympic medals. “If I had a problem, I could call her at home. It was like talking to someone you knew for a lifetime.”

Rudolph touched Olympians and non-Olympians alike. She had four kids of her own and in her post-Olympic years she worked as a track coach at Indiana’s DePauw University and served as a U.S. goodwill ambassador to French West Africa.

“I tell them that the most important aspect is to be yourself and have confidence in yourself,” she said. “I remind them the triumph can’t be had without the struggle.”

Rudolph died of brain cancer at age 54 on Nov. 12, 1994 in Nashville. Her extraordinary calm and grace are what people remember most about her. Said Bill Mulliken, a 1960 Olympics teammate of Rudolph’s: “She was beautiful, she was nice, and she was the best.” Research more about this great American and share with your babies. Make it a champion day!